Editor’s note: The following excerpts are selected from “Talks by Nirodbaran at Sri Aurobindo International Centre of Education” edited by Ranganath R. and Sudha, Helios Books, 2012.

So I seem to have gained some fame and reputation as a speaker. You understand my English? Yes. That is a bit of a surprise because when I was young, a child like you, I was supposed to be very shy and somewhat tongue-tied. You know what is tongue-tied? When I became a little older, after I passed out of school, I wanted to go to England. I had no father then, I’d lost my father when I was a child like you. I had a guardian, and when I suggested to him that I would like to go to England, he asked, “What for ?” I replied, “I want to be a barrister.” He said contemptuously, “Huh! Huh! A fellow who can’t talk two words wants to be a barrister!” There you are ! Either out of shyness or due to some other reason I could talk but I could not speak!

Similarly, when I came to see Mother, a number of years after my return from England, I met Her there for the first time, where Reading Room is at present. Mother used to meet people there. That was the Darshan room. It seemed She was very happy and surprised to see me, and began to smile and she kept on smiling and I was feeling very uncomfortable ! I was looking up and looking down – once up and once down – and She kept smiling all the while; not a word was coming out of my mouth. Then She commented, “He is very shy.” So a shy person, a dumb person like I am, has become a speaker. Is this not a miracle ? So here is one more miracle before you.

There are many other miracles the Guru performed on me. I was a big ass, He has made me an intelligent ass; I was a medical man, He has made me a poet; so if these are not miracles, what are they? A fellow who could not write a single line of poetry has now become a poet. One who could not utter a single word, who used to feel shy in the presence of people, has now become a speaker. There is a verse which says: The Divine Grace can make a dumb fellow talkative, and one who is lame can be made to jump over a mountain. The Divine Grace, the Divine Power can do that. I did not believe this when I was a child; but now when I am a grown-up man, Sri Aurobindo has proved it to me by my own example. (pp. 194-195)

I told Him [Sri Aurobindo] once, in one of my difficult moments – I had quite a number of them – that I didn’t know what had brought me here. I didn’t know what yoga was, I didn’t know that He was the Divine or an Avatar. “But this I know for certain that You have the power to keep me here; and there is no power on this earth which can take me away if You don’t want it.” I have quarrelled with Him a lot, as you know, wordy duels, rather windy. I even had the temerity to differ with Him and even to say that He was contradicting Himself. (Laughter) But in the end, whatever He said, I took it to be the final truth and I’ve tried to follow it. Perhaps therein lay my strength. (p. 126)

My friends, you must remember that whether you have capacity or incapacity, it doesn’t matter in the least; yoga or bhoga, it doesn’t matter. A girl told me, “I don’t know yoga.” You don’t need to know it. You know Mother. Let Her take care of you. Don’t bother about all that. Who knows yoga? Who knows if you have spiritual capacity or not? To bother our heads about capacity will end us in ruin. Let us do our work and be cheerful with some sense of humour – that is very necessary, very necessary indeed. Otherwise we’ll make asses of ourselves. (p. 134) 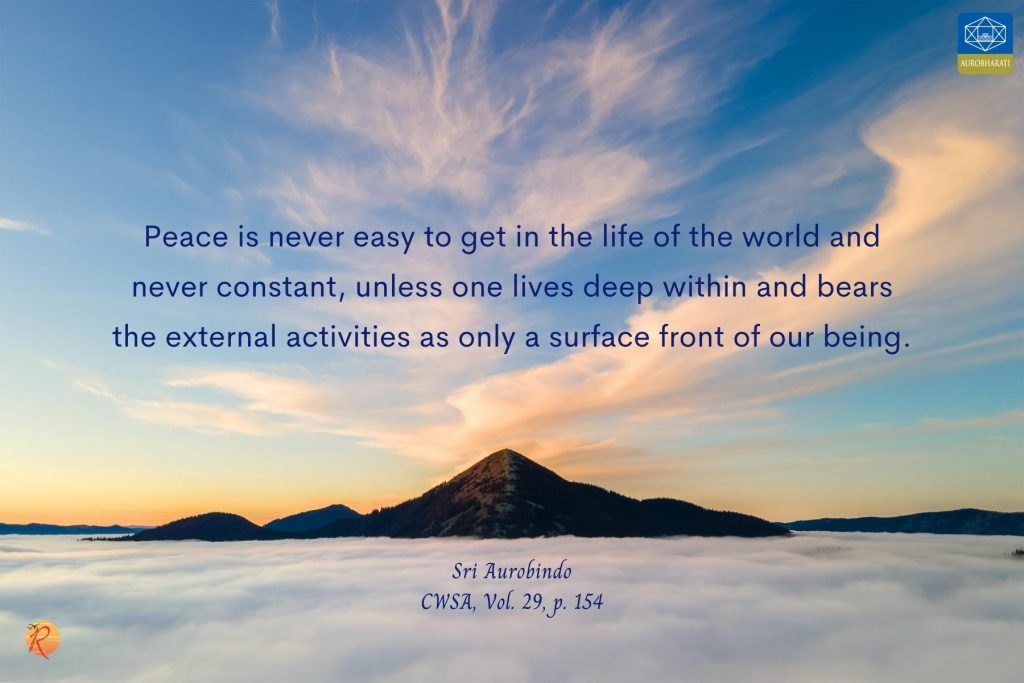