The Religion of Humanity and Democratic Trinity – Part II

Home » The Religion of Humanity and Democratic Trinity – Part II

But still in order to accomplish all its future this idea and religion of humanity has to make itself more explicit, insistent and categorically imperative. For otherwise it can only work with clarity in the minds of the few and with the mass it will be only a modifying influence, but will not be the rule of human life.

And so long as that is so, it cannot entirely prevail over its own principal enemy. That enemy, the enemy of all real religion, is human egoism, the egoism of the individual, the egoism of class and nation.

These it could for a time soften, modify, force to curb their more arrogant, open and brutal expressions, oblige to adopt better institutions, but not to give place to the love of mankind, not to recognise a real unity between man and man.

For that essentially must be the aim of the religion of humanity, as it must be the earthly aim of all human religion, love, mutual recognition of human brotherhood, a living sense of human oneness and practice of human oneness in thought, feeling and life, the ideal which was expressed first some thousands of years ago in the ancient Vedic hymn and must always remain the highest injunction of the Spirit within us to human life upon earth.

Till that is brought about, the religion of humanity remains unaccomplished. With that done, the one necessary psychological change will have been effected without which no formal and mechanical, no political and administrative unity can be real and secure. If it is done, that outward unification may not even be indispensable or, if indispensable, it will come about naturally, not, as now it seems likely to be, by catastrophic means, but by the demand of the human mind, and will be held secure by an essential need of our perfected and developed human nature.

The Weakness of the Intellectual Idea

But this is the question whether a purely intellectual and sentimental religion of humanity will be sufficient to bring about so great a change in our psychology.

The weakness of the intellectual idea, even when it supports itself by an appeal to the sentiments and emotions, is that it does not get at the centre of man’s being. The intellect and the feelings are only instruments of the being and they may be the instruments of either its lower and external form or of the inner and higher man, servants of the ego or channels of the soul.

The aim of the religion of humanity was formulated in the eighteenth century by a sort of primal intuition; that aim was and it is still to re-create human society in the image of three kindred ideas, liberty, equality and fraternity.

None of these has really been won in spite of all the progress that has been achieved.

The liberty that has been so loudly proclaimed as an essential of modern progress is an outward, mechanical and unreal liberty.

The equality that has been so much sought after and battled for is equally an outward and mechanical and will turn out to be an unreal equality.

Fraternity is not even claimed to be a practicable principle of the ordering of life and what is put forward as its substitute is the outward and mechanical principle of equal association or at the best a comradeship of labour.

This is because the idea of humanity has been obliged in an intellectual age to mask its true character of a religion and a thing of the soul and the spirit and to appeal to the vital and physical mind of man rather than his inner being.

It has limited his effort to the attempt to revolutionise political and social institutions and to bring about such a modification of the ideas and sentiments of the common mind of mankind as would make these institutions practicable; it has worked at the machinery of human life and on the outer mind much more than upon the soul of the race. It has laboured to establish a political, social and legal liberty, equality and mutual help in an equal association.

The Central Thing: Change of the Inner Human Nature

But though these aims are of great importance in their own field, they are not the central thing; they can only be secure when founded upon a change of the inner human nature and inner way of living; they are themselves of importance only as means for giving a greater scope and a better field for man’s development towards that change and, when it is once achieved, as an outward expression of the larger inward life.

Freedom, equality, brotherhood are three godheads of the soul; they cannot be really achieved through the external machinery of society or by man so long as he lives only in the individual and the communal ego.

When the ego claims liberty, it arrives at competitive individualism.

When it asserts equality, it arrives first at strife, then at an attempt to ignore the variations of Nature, and, as the sole way of doing that successfully, it constructs an artificial and machine-made society.

A society that pursues liberty as its ideal is unable to achieve equality; a society that aims at equality will be obliged to sacrifice liberty.

For the ego to speak of fraternity is for it to speak of something contrary to its nature. All that it knows is association for the pursuit of common egoistic ends and the utmost that it can arrive at is a closer organisation for the equal distribution of labour, production, consumption and enjoyment.

Yet is brotherhood the real key to the triple gospel of the idea of humanity.

The union of liberty and equality can only be achieved by the power of human brotherhood and it cannot be founded on anything else. But brotherhood exists only in the soul and by the soul; it can exist by nothing else.

For this brotherhood is not a matter either of physical kinship or of vital association or of intellectual agreement.

When it claims equality, what it is claiming is that freedom equally for all and the recognition of the same soul, the same godhead in all human beings.

When it strives for brotherhood, it is founding that equal freedom of self-development on a common aim, a common life, a unity of mind and feeling founded upon the recognition of this inner spiritual unity.

These three things are in fact the nature of the soul; for freedom, equality, unity are the eternal attributes of the Spirit.

It is the practical recognition of this truth, it is the awakening of the soul in man and the attempt to get him to live from his soul and not from his ego which is the inner meaning of religion, and it is that to which the religion of humanity also must arrive before it can fulfil itself in the life of the race. 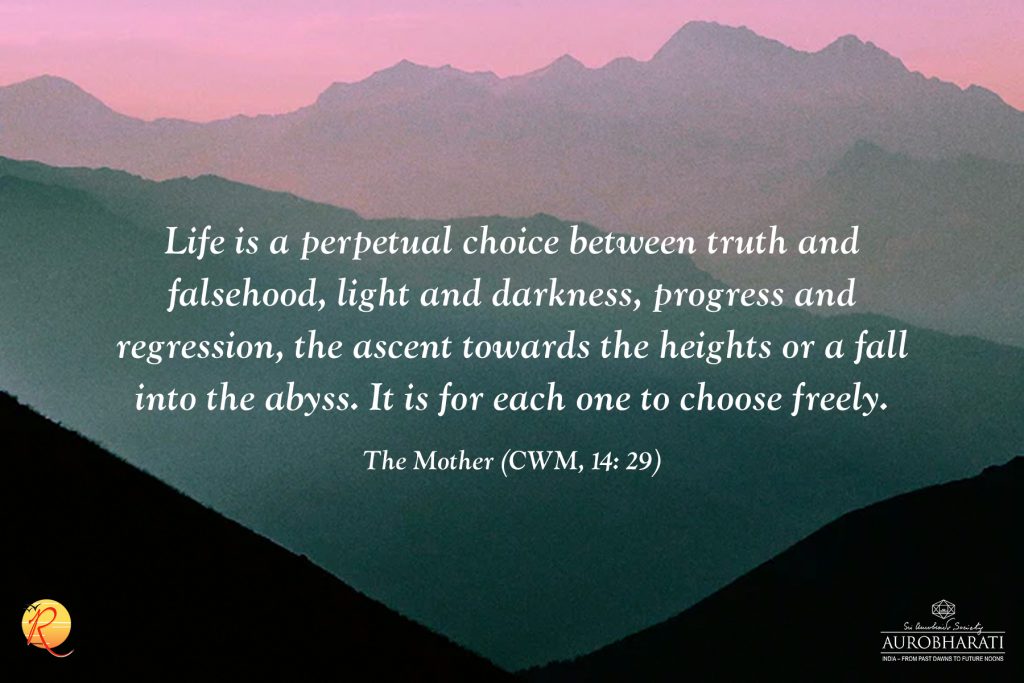