The Mother is Indeed Always Present

Editor’s note: As part of our offerings for the festival of the Divine Shakti, we feature in this issue two excerpts from M. P. Pandit’s book titled, Commentaries on the Mother’s Ministry, Vol. 1 (1983), published by Sri Aurobindo Ashram. Meditating on who the Mother is, opening oneself to Her Force, giving oneself to Her entirely so that She may make of us what She wills — this is the true worship to be offered at the feet of the Divine Mother by all those who have turned to Her.

The Mother as Shakti

Sri Aurobindo once observed that but for the Mother his philosophy may have remained a theory. It is she who has given practical form to his teaching. He explains that things had come to a standstill at a certain stage in his sadhana. The work that he was called upon to undertake required the presence of the appointed Shakti. If it was only a question of his developing a new philosophy, a new yoga and communicating it to a small circle of disciples, it would have been a different matter. But here it was a task of a universal dimension. And a break-through was effected only with the coming of the Mother.

All of us know that but for her it is doubtful if the Ashram would have come into being. It was only after her joining the little family that had grown around Sri Aurobindo, that things began to get organised and the beginnings of the Ashram commenced in the early twenties. She it was who demonstrated first in the Ashram collectivity and gradually in her unseen spiritual empire all over the world that Life Divine is not a distant dream or vision but a viable and inevitable philosophy of life for man who is searching for the meaning of life and its goal.

Again it was she who provided the environment and the necessary guidance for those who aspired to practise the Yoga of Self-Perfection in which Knowledge, Will, Love enter as contributory elements. She it was who made of the Ideal of Human Unity a living actuality on however small a scale. She herself was a splendid example of Sri Aurobindo’s concept of integral surrender to the Divine and she taught its process to all who asked for it. In a word, she set into realisation all that Sri Aurobindo had conceived. The Movement is on and is sure to gather momentum as the evolution of the Earth-being proceeds. Her attention was always on the present, the actual; she did not allow herself to be distracted by the possibilities of the future.

As long as Sri Aurobindo was physically present, she always pointed to him as the Master of Yoga, the Revealer of the Path, the supreme Purusha of the manifesting Consciousness. She tried to keep herself, not always successfully, in the background. Some even took her to be a disciple, though the first disciple, of Sri Aurobindo. But it was not so. Even before she came to India and met Sri Aurobindo, she had had significant spiritual and occult attainments and was only waiting for the destined divine collaborator with whom she had to work out a definite mission.

She was instrumental in getting Sri Aurobindo to communicate the great Knowledge that had been revealed to him in the course of his tapasya (yogic austerities), through the Arya. Later Sri Aurobindo asked her to take charge of his work, his disciples, and enjoined on all that she was his representative and he could be approached only through her. She represented him in all activities and naturally became the Leader, the Protagonist of this world-movement for integral perfection of life and its ultimate divinisation.

After Sri Aurobindo withdrew from the physical world, there were anxious moments for many about the future of the Work. But for those who had faith, the inner perception, there was never any doubt. The Mother had to continue Sri Aurobindo’s mission on earth and she did it after receiving clear indications that she was chosen to do so and had no option in the matter. And the work continued. Not only did it continue, but it expanded and grew by leaps and bounds under her direction and dynamic drive. She continued and continues to continue even after her own physical withdrawal.

Also read: Goddess Durga and the Festival of Devi: An Inner Meaning

Always behave as if the Mother was looking at you; because she is, indeed, always present. (Sri Aurobindo)

When this was placed there — in the early years of the Ashram — someone asked Sri Aurobindo if ‘were’ in the place of ‘was’ would not be more grammatically correct. Sri Aurobindo answered that ‘was’ had been used advisedly as ‘were’ would suggest that the Mother was really not present, whereas in fact she was always present.

Yes, the Mother is always present, her consciousness cannot be escaped in Pondicherry. Mother explains how this consciousness permeates the subtle physical atmosphere up to seven miles reaching to the Lake; further on it can be felt in the material vital, then in the mental and the other planes everywhere. This presence is distinctive and has a dynamic character of its own.

When the Mother says, ‘I am with you’, she speaks of this consciousness of hers which is present with us on all levels, from the physical to the highest spiritual. It is not a figure of speech but a statement of fact. She is concretely with us, working dynamically in us leading us to the destined goal.

Whenever anyone opens to Sri Aurobindo or the Mother, a special bond of affection is formed between him and the Mother. The physical distance is no bar. It may be anywhere in the world. The moment one turns to this Teaching, a tie comes into being. Thereafter, each time there is a call, there is an immediate communication and the Mother responds: it may be to send a special help, an inspiration or protection. We have seen the Mother going into trance or semi-trance, all of a sudden in the midst of work, and resuming after a few moments. They were such occasions when she needed to concentrate.

There is something more with those whom she has accepted as her disciples. An emanation of her dwells with the individual and it keeps a constant connection. It relates all that happens in the person with the Mother’s consciousness. Only it is not registered in her active memory but in her subliminal. She can always call it up when she needs to know in her physical consciousness.

It must be added that this consciousness, presence, is not something general, impersonally spiritual. It is intensely personal and one can sense, feel the personal touch of the Mother when one becomes aware of it. Usually it takes the form in which one is accustomed to visualise or recall her figure. Times without number people on the operation tables in surgeries have reported seeing Mother’s figure in white standing by their side. So often we have known a gentle Hand holding us when we were about to fall. The experience is vivid and concrete. That is because She is with us.

The Mother assures that this bond between her and those who turn to her is never cut. Even those who revolted from her and left the Ashram have continued to be recipients of her grace and solicitude. She never abandons. She holds herself responsible even for those whom she has met just for a second in her life. That is so because she knows that nobody just comes to her; everybody is brought to her because of some soul-need.

One word more. It is not that this happens only to those who have met Mother physically. Even those who have never seen her physically but have opened to her Truth in some way or other, have testified to this action of her consciousness in their personal lives. “Yes,” they say, “Mother is with us.”

The Mother sums up the rationale in these cryptic words:

I am with you because I AM you or you are me.

She identifies herself with each one entirely.

Also see:
Open Your Soul to Her 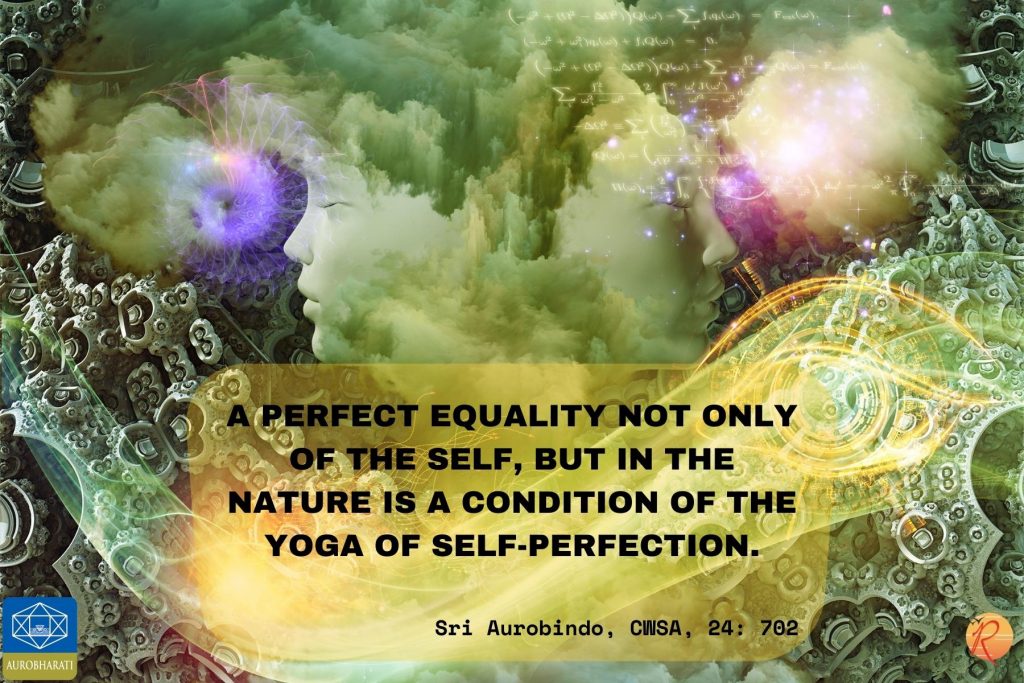 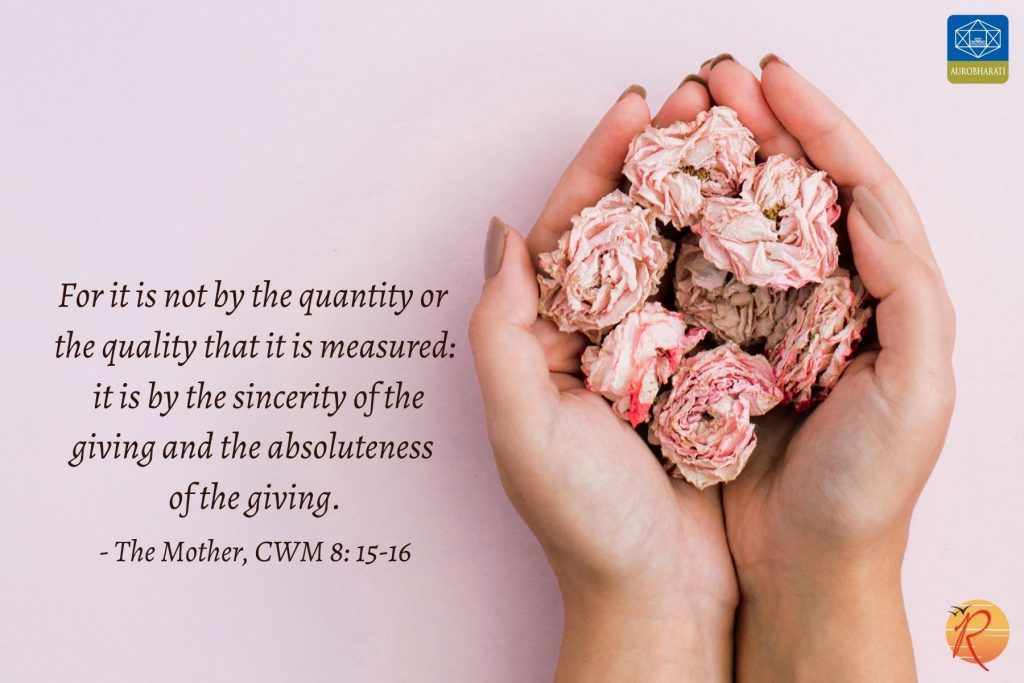