The Initiation – A Story Told by the Mother

Home » The Initiation – A Story Told by the Mother

Editor’s note: The Mother told this story on 22nd March, 1957 at Ashram playground during her Wednesday French class. The class was composed of sadhaks of the Ashram and students of the Ashram’s school. Her conversations were later translated into English. We have made a few formatting revisions for the purpose of this online presentation.

This evening I am going to read to you a short story which seemed quite instructive to me. It is a tale of ancient times, of what used to happen before there were printing presses and books, of the days when only the Guru or the Initiate had the knowledge and gave it only to those he considered worthy of having it. And for him, usually, “to be worthy of having it” meant putting into practice what one had learnt. He gave you a truth and expected you to practise it. And when you had put it into practice, he consented to give you another.

Now things happen quite differently. Everybody and anybody can have a book, read it right through and he is quite free to practise it or not as he pleases. This is all very well, but it creates a certain confusion in many minds, and people who have read many books think that it is enough and that all sorts of miraculous things must happen to them because they have read books, and that they don’t need to take the trouble of practising.

So they become impatient and say, “How is it that although I have read all this I am still just the same person, have the same difficulties, haven’t achieved any realisation?” I very often hear remarks of this kind.

They forget only one thing, that they have obtained the knowledge—intellectual, mental knowledge—before having deserved it, that is, before having put into practice what they have read, and that, naturally, there is discrepancy between their state of consciousness and the ideas, the knowledge they can speak about at length but which they haven’t practised.

So it is for the impatient ones that I am going to read this story, to tell you how things happened in the days of old when one couldn’t simply have a book and read it, when one depended on the Guru or the Initiate to obtain the knowledge which he alone had; he had received it from another Guru, another Initiate, and he transmitted it to you when he pleased, that is, when he found you worthy of having it.

So here’s my story (Mother reads):

A Story of Initiation
(Translated from Gujarati)

Once upon a time there was a Mahatma who was a great ascetic and a great pandit. He was honoured by all, full of years and wisdom. His name was Junun. Many young boys, many young men used to come to him to receive initiation. They stayed in his hermitage, became pandits themselves, then returned home after a long and studious retreat.

One day a young man came to him. His name was Yusuf Hussein. The Mahatma agreed to let him stay with him without even asking who he was.

Four years went by, thus, until one morning Junun sent for Yusuf and, for the first time, questioned him: “Why have you come here?” Without a second thought Yusuf answered: “To receive religious initiation.” Junun said nothing. He called a servant and asked him, “Have you prepared the box as I asked you?”

“Yes, Master, it is there, quite ready.”

With great care the servant placed the box before the Mahatma. He took it and gave it to Yusuf:

“I have a friend who lives there on the banks of the river Neela. Go and take this box to him from me. But take good care, brother, don’t make any mistake on the way. Keep this box carefully with you and give it to the man whom it is for. When you come back I shall give you initiation.”

Once again the Mahatma repeated his advice and described the route Yusuf had to follow to reach the river Neela. Yusuf bowed down at his Guru’s feet, took the box and started on his way.

The retreat where the Mahatma’s friend lived was quite far away and in those days there were no cars or railways. So Yusuf walked. He walked the whole morning, then came the afternoon. The heat was intense and radiated everywhere. He felt tired. So he sat down in the shade of an old tree by the roadside to rest a little. The box was very small. It was not locked. Besides, Yusuf had not even paid attention to it. His Guru had told him to carry a box, and he had started off without another word.

But now, during the afternoon rest, Yusuf began to think. His mind was free to wander with nothing to occupy it…. It would be very rare indeed if on such occasions some foolish idea did not cross the mind…. Thus his eyes fell on the box. He began to look at it.

“A pretty little box!… Why, it does not seem to be locked…. And how light it is! Is it possible that there is anything inside? So light…. Perhaps it is empty?”

Yusuf stretched out his hand as though to open it. Suddenly he thought better of it:

“But no…. Full or empty, whatever is in this box is not my concern. My Guru asked me to deliver it to his friend, nothing more. And that’s all that concerns me. I should not care about anything else.”

For some time Yusuf sat quietly. But his mind would not remain quiet. The box was still there before his eyes. A pretty little box. “It seems quite empty,” he thought, “what harm would there be in opening an empty box?… If it had been locked I would understand, that would be bad…. A box which is not even locked, it can’t be very serious. I’ll just open it for a moment and then shut it again.”

Yusuf’s thought turned round and round that box. It was impossible to detach himself from it, impossible to control this idea that had crept into him. “Let me see, only a quick glance, just a glance.” Once again he stretched out his hand, drew it back once more, then again sat still. All in vain.

Finally Yusuf made up his mind and gently, very gently, he opened the box. Hardly had he opened it than pfft! a little mouse jumped out… and disappeared. The poor mouse all stifled in its box did not waste a second in leaping to freedom!

Yusuf was bewildered. He opened his eyes wide and gazed and gazed. The box lay there empty. Then his heart started throbbing sadly: “So, the Mahatma had sent only a mouse, a tiny little mouse…. And I couldn’t even carry it safe and sound to the end. Indeed I have committed a serious fault. What shall I do now?”

Yusuf was full of regrets. But there was nothing more to do now. In vain he went round the tree, in vain he looked up and down the road. The little mouse had actually fled…. With a trembling hand Yusuf closed the lid and in dismay resumed his journey.

When he reached the river Neela and the house of his Master’s friend, Yusuf handed the Mahatma’s present to him and waited silently in a corner because of the fault he had committed. This man was a great saint. He opened the box and immediately understood what had happened.

“Well, Yusuf,” he said, turning to the young aspirant,

“so you have lost that mouse…. Mahatma Junun won’t give you initiation, I am afraid, for in order to be worthy of the supreme Knowledge one must have a perfect mastery over one’s mind. Your Master clearly had some doubts about your will-power, that is why he resorted to this little trick, to put you to the test. And if you are not able to accomplish so insignificant a thing as to keep a little mouse in a box, how do you expect to keep great thoughts in your head, the true Knowledge in your heart? Nothing is insignificant, Yusuf. Return to your Master. Learn steadiness of character, perseverance. Be worthy of trust so as to become one day the true disciple of that great Soul.”

Crestfallen, Yusuf returned to the Mahatma and confessed his fault.

“Yusuf,” he said, “you have lost a wonderful opportunity. I gave you a worthless mouse to take care of and you couldn’t do even that! How then do you expect to keep the most precious of all treasures, the divine Truth? For that you must have self-control. Go and learn. Learn to be master of your mind, for without that nothing great can be accomplished.”

Yusuf went away ashamed, head down, and from then on he had only one thought: to become master of himself…. For years and years he made tireless efforts, he underwent a hard and difficult tapasya, and finally succeeded in becoming master of his nature. Then, full of confidence Yusuf went back to his Master. The Mahatma was overjoyed to see him again and find him ready. And this is how Yusuf received from Mahatma Junun the great initiation.

Many, many years went by, Yusuf grew in wisdom and mastery. He became one of the greatest and most exceptional saints of Islam.

(Mother speaks to the children.)

So, this is to tell you that you must not be impatient, that you must understand that in order to really possess knowledge, whatever it may be, you must put it into practice, that is, master your nature so as to be able to express this knowledge in action. 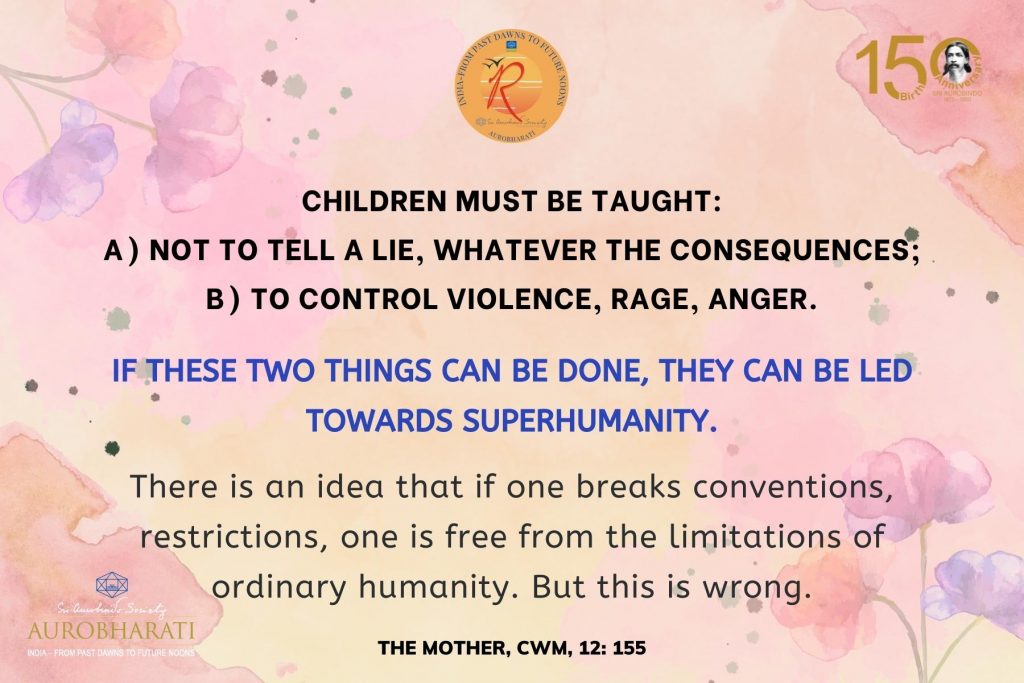 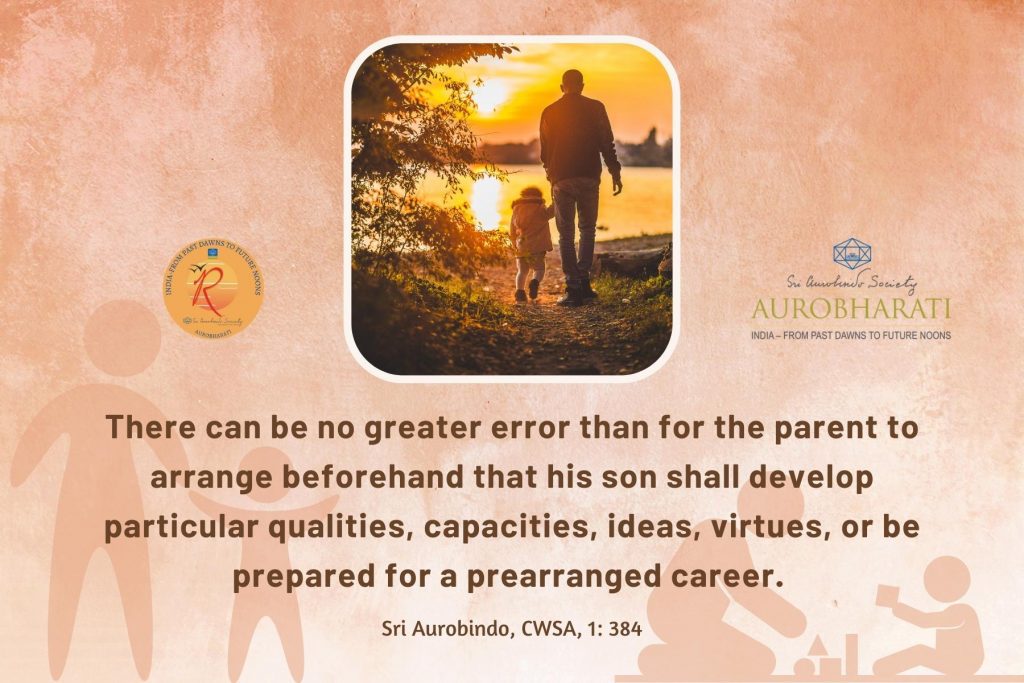 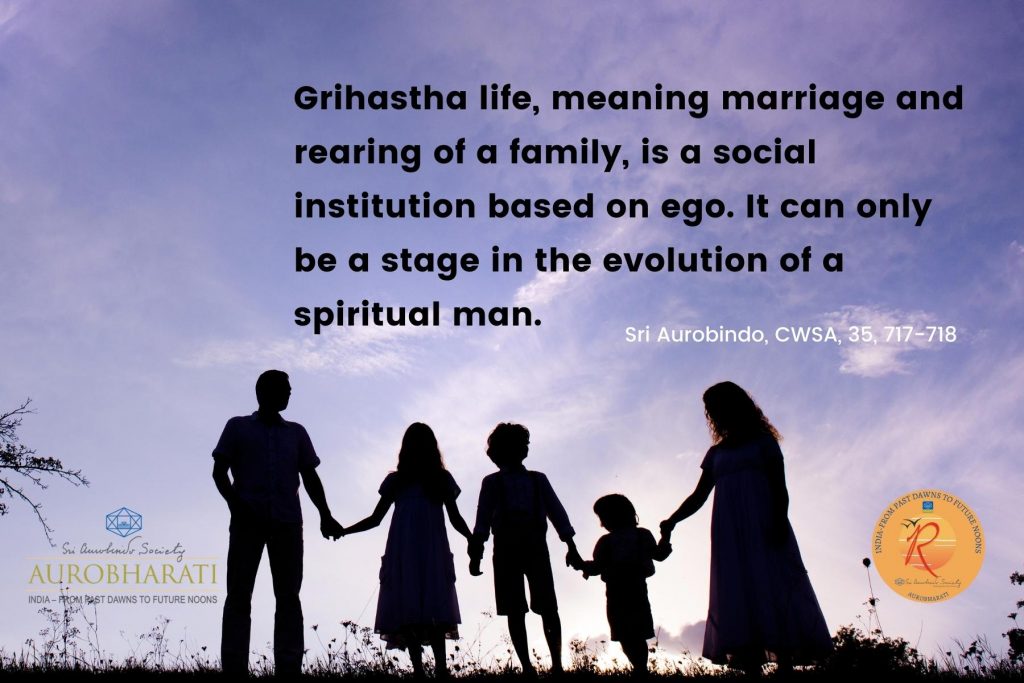