LOVE FOR MAN AND EARTH IN LATER POEMS OF SRI AUROBINDO

In one of his later poems ‘The Life-Heavens’, which is a gem of dazzling splendour, Sri Aurobindo gives us a fuller view of his love for the earth. We gather that once when he was passing in experience through the life-heavens on his pilgrimage to the Supreme for soliciting the boon of the earth’s deliverance and divine transfiguration, the enrapturing beauty and bliss, the magic and music of those heavens held him in thrall, and his soul sank “drowned in the wonder-surge” (CWSA, Vol. 2, p. 550).

The spell was so sudden and overpowering that for a brief moment it made him forget his mission and the aspiration which was im­pelling his Godward flight; – his spirit lay “at ease in a sweetness of heaven-sense”, “delivered from grief, with no need left to aspire”, “free, self-dispersed in volup­tuous innocence” and “lulled and borne into roseate cloud-fire” (ibid). But the lover of man and earth was not to be baulked of his life’s mission by the enchantment of the life-heavens. While he lay

In the clasp of a Power that enthrals to sheer
Bliss and Beauty body and rapt soul, (ibid., p. 550)

he heard “Earth’s outcry to the Sublime,” — an outcry “deep as Night, imperishable as Time;” (ibid.)

O high seeker of immortality,
Is there not, ineffable, a bliss
Too vast for these finite harmonies,
Too divine for the moment’s unsure kiss?

Arms taking to a voiceless supreme delight,
Life that meets the Eternal with close breast,
An unwalled mind dissolved in the Infinite,
Force one with unimaginable rest?

I, Earth, have a deeper power than Heaven;
My lonely sorrow surpasses its rose-joys,
A red and bitter seed of the raptures seven;—
My dumbness fills with echoes of a far Voice.

By me the last finite, yearning, strives
To reach the last infinity’s unknown,
The Eternal is broken into fleeting lives
And Godhead pent in the mire and the stone. (ibid., pp. 550-551)

This cry of the earth, as whose messenger he was journeying to the Supreme, roused the poet’s bewitched aspiration and, shaking off the spell, he soared up straight to his goal – “Crossed seas of Light to epiphanies of Love.” (ibid., p. 551)

In his symbolic mystic poem ‘The Bird of Fire’, Sri Aurobindo sings of the same flight of the soul to the timeless Absolute; not certainly for self-annihilation in the Absolute’s Light and Bliss, but for bringing down to earth its delivering and transforming Grace:

Gold-white wings of the miraculous bird of fire, late and slow have
you come from the Timeless. Angel, here unto me
Bringst thou for travailing earth a spirit silent and free or His
crimson passion of love divine,—
(CWSA, Vol. 2, p. 547)

If it be only a silent and free spirit that has been brought down from the Eternal, says the poet, then it will mean no new dawn for the earth’s long night – it may effect only the escape of a few evolved souls from the agony of terrestrial existence. But the agony will remain, the toil and travail of the earth will continue as ever. But if it is “His crimson passion of love divine” that has been brought down, then, indeed, the earth is saved, her age-long suffering will vanish, and she will become a transfigured abode of the unveiled Supreme. It is the Divine’s Love alone, and not the free and silent witness Spirit in its impassive immobility, that can achieve the miracle of material transformation and earthly apocalypse.

In another poem, ‘Jivanmukta’, there is again the same master-idea of the redemption and transformation of the material Nature. The Jivanmukta, accord­ing to Sri Aurobindo, does not live in a lofty seclusion of calm indifference or in a spirit of benign beneficence, moved now by his ethical will and now by the half-veiled impulsions of the secret divinity within him. He has become “Eternity’s foothold” (ibid, p. 551) and thrilling, “thoughtless and wordless”, in the Eternal’s breast

Unrolls the form and sign of being,
Seated above in the omniscient Silence. (ibid., p. 552)

He lives and acts
Only to bring God’s forces to waiting Nature,
To help with wide-winged Peace her tormented labour
And heal with joy her ancient sorrow,
Casting down light on the inconscient darkness. (ibid., p. 552)

A dizzy height of lyrical magnificence is reached in the ‘Rose of God’, the crest-jewel of Sri Aurobindo’s shorter mystical poems, the iridescent Mantra of supra-mental transformation. His love of man and earth attains here a depth and con­centrated intensity of expression which makes the poem at once an invocation and a revelation, a prayer, a prophecy and a promise.

The highest spiritual vision unmasks the Divine in the dense obscurity of the labouring earth as well as in the tormented mortality of human life, and the Muse of the seer sings, in accents of fire, a most perfect Mantra to evoke His ascent from below and invoke His descent from above. The ‘Rose of God’ is the Magna Charta of divine humanity, and if Sri Aurobindo had written no other poem, this one alone would have made him immortal as the greatest poet and prophet and lover of man and earth. We reproduce below the whole of this powerful mantra:

Rose of God, vermilion stain on the sapphires of heaven,
Rose of Bliss, fire-sweet, seven-tinged with the ecstasies seven!
Leap up in our heart of humanhood, O miracle, O flame,
Passion-flower of the Nameless, bud of the mystical Name.

Rose of God, great wisdom-bloom on the summits of being,
Rose of Light, immaculate core of the ultimate seeing!
Live in the mind of our earthhood; O golden Mystery, flower,
Sun on the head of the Timeless, guest of the marvellous Hour.

Rose of God, damask force of Infinity, red icon of might,
Rose of Power with thy diamond halo piercing the night!
Ablaze in the will of the mortal, design the wonder of thy plan,
Image of Immortality, outbreak of the Godhead in man.

Rose of God, smitten purple with the incarnate divine Desire,
Rose of Life, crowded with petals, colour’s lyre!
Transform the body of the mortal like a sweet and magical rhyme;
Bridge our earthhood and heavenhood, make deathless the children of Time.

Rose of God like a blush of rapture on Eternity’s face,
Rose of Love, ruby depth of all being, fire-passion of Grace!
Arise from the heart of the yearning that sobs in Nature’s abyss:
Make earth the home of the Wonderful and life Beatitude’s kiss.”
(CWSA, Vol. 2, p. 564)

GLORIOUS DESTINY OF MAN AND EARTH IN SAVITRI

From the ‘Rose of God’ we can turn only to the crowning achievement of Sri Aurobindo’s Muse – the marvellous, monumental, mystical epic, Savitri, where we get surge after gleaming surge of Sri Aurobindo’s vision of the glorious destiny of man and earth.

There is nothing in the literature of the world to compare with this illuminating and inspiring expression of the all-embracing love that sees at once the present wretchedness of earth, her darkness and inertia and insensibility, and the inevitable culmination of her evolution in the perfect emergence out of herself of the triune Godhead, Sachchidananda. Man is seen at once in his present littleness, his ambitious ignorance and clinging discontent and in his eventual victory in the creative glory of the fife everlasting.

His days are tinged with the red hue of strife
And lust’s hot glare and passion’s crimson stain;
Battle and murder are his tribal game.
Time has he none to turn his eyes within
And look for his lost self and his dead soul.
(CWSA, Vol. 33-34, p. 165)

And yet in God’s own transfiguring hour, in the destined fullness of evolution,
Men shall be lit with the Eternal’s ray
And the glory of my sun-lift in their thoughts
And feel in their hearts the sweetness of my love
And in their acts my Power’s miraculous drive. (ibid., p. 699)

A mightier race shall inhabit the mortal’s world.
On Nature’s luminous tops, on the Spirit’s ground.
The superman shall reign as king of life,
Make earth almost the mate and peer of heaven
And lead towards God and truth man’s ignorant heart
And lift towards godhead his mortality. (p. 706)

A greater truth than earth’s shall roof-in earth
And shed its sunlight on the road of mind;
A power infallible shall lead the thought,
A seeing Puissance govern life and act,
In earthly hearts kindle the Immortal’s fire.
A soul shall wake in the Inconscient’s house;
The mind shall be God-vision’s tabernacle,
The body intuition’s instrument,
And life a channel for God’s visible power.
All earth shall be the Spirit’s manifest home,
Hidden no more by the body and the life,
Hidden no more by the mind’s ignorance;
An unerring Hand shall shape event and act.
The Spirit’s eyes shall look through Nature’s eyes,
The Spirit’s Force shall occupy Nature’s Force.
This world shall be God’s visible garden-house,
The earth shall be a field and camp of God.
Man shall forget consent to mortality
And his embodied frail impermanence. (p. 707)

All things shall manifest the covert God,
All shall reveal the Spirit’s light and might
And move to its destiny of felicity. (p. 708) 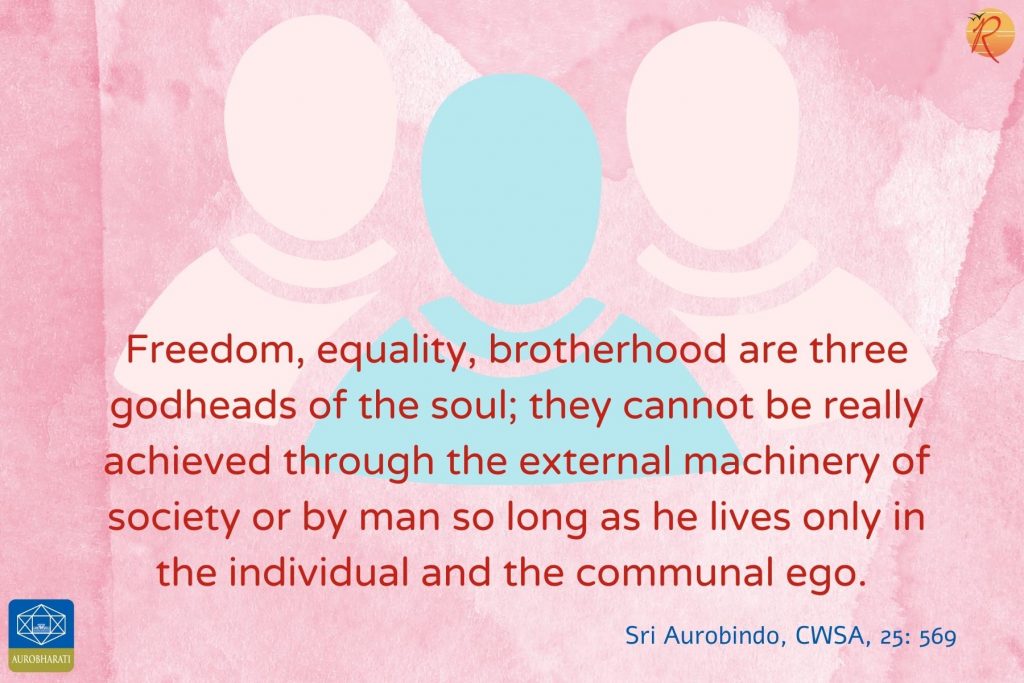 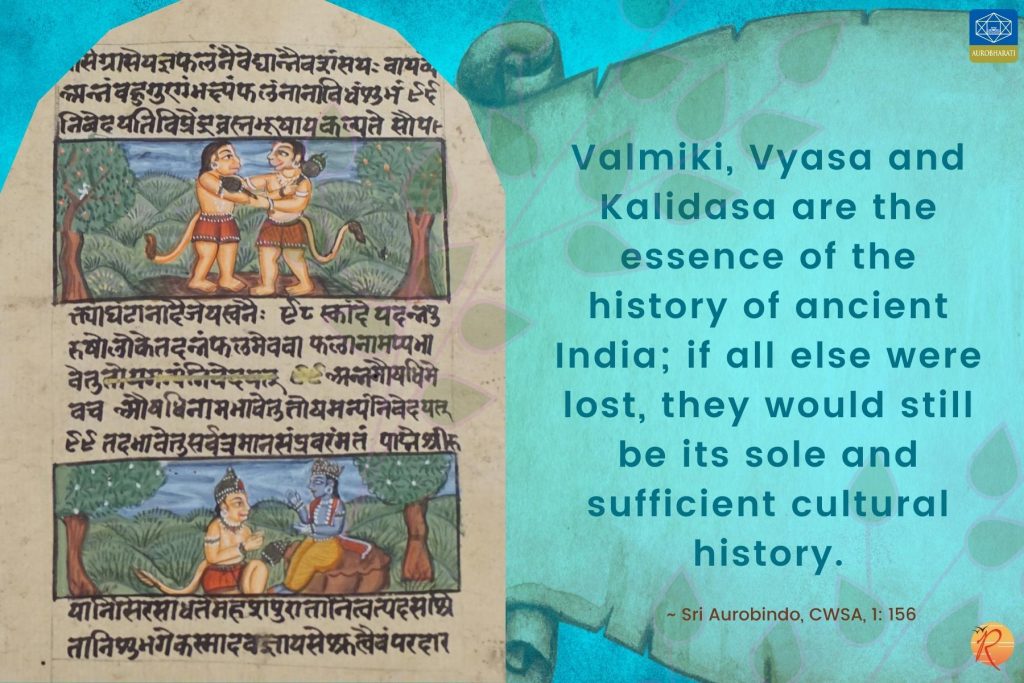