Siddhi Day, the Descent of the Overmind God

Home » Siddhi Day, the Descent of the Overmind God

By 1926 the number of inmates had increased to 25; they came mostly from Bengal, Gujarat and the South, whilst two, Datta and Pavitra, came from countries beyond the shores of India. The foundations of the Ashram had begun to be laid.

We come now to the great day, November 24, 1926, known as the Day of Siddhi. For sometime past the disciples could see that Sri Aurobindo was more and more absorbed in his sadhana. Often he would be late in coming for the evening talks — on one occasion he came at two o’clock in the morning! The feeling grew among the disciples that some Higher Power would soon descend and the expectation was strengthened by the various references Sri Aurobindo made in his talks to its distinct possibility. In the course of a talk on his birthday in 1925, Sri Aurobindo mentioned that the universal conditions were more ready now for the coming down of the Supermind. He said:

“Firstly, the knowledge of the physical world has increased so much that it is on the verge of breaking its own bounds.

“Thirdly, the vital is trying to lay its hold on the physical as it never did before…. Also, the world is becoming more united on account of the discoveries of modern science…. Such a union is the condition for the highest Truth coming down and it is also our difficulty. Fourthly, the rise of persons who wield tremendous vital influence over large numbers of men.

“These are some of the signs to show that the universal condition may be more ready now.”

On the other hand, Sri Aurobindo also stressed that there was still great resistance in the earth atmosphere to the Truth descending and said:

“I find that the more the Light and Power are coming down the greater is the resistance. You yourself can see that there is something pressing down. You can also see that there is tremendous resistance. . . I am not doing an isolated yoga. . . If I were seeking my own liberation and perfection, my yoga would have been finished long ago.”

Let me return to November 24, 1926. There were 24 disciples who had the good fortune to be present on that momentous day. Purani was one of them and I shall quote from his Life of Sri Aurobindo to give you an eye-witness account:

“From the beginning of November 1926 the pressure of the Higher Power began to be unbearable. Then at last the great day, the day for which the Mother had been waiting for so many long years, arrived on 24th November. The sun had almost set, and everyone was occupied with his own activity — some had gone out to the seaside for a walk — when the Mother sent word to all the disciples to assemble as soon as possible in the verandah where the usual meditation was held. It did not take long for the message to go round to all.

“By six o’clock most of the disciples had gathered. It was becoming dark. In the verandah on the wall near Sri Aurobindo’s door, just behind his chair, a black silk curtain with gold lace work representing three Chinese dragons was hung. The three dragons were so represented that the tail of one reached up to the mouth of the other and the three of them covered the curtain from end to end. We came to know afterwards that there is a prophecy in China that the Truth will manifest itself on earth when the three dragons (the dragons of the earth, of the mid-region and of the sky) meet. Today on 24 November the Truth was descending and the hanging of the curtain was significant.

“There was a deep silence in the atmosphere after the disciples had gathered there. Many saw an oceanic flood of Light rushing down from above. Everyone present felt a kind of pressure above his head. The whole atmosphere was surcharged with some electrical energy. In that silence, in that atmosphere full of concentrated expectation and aspiration, in the electrically charged atmosphere, the usual, yet on this day quite unusual, tick was heard behind the door of the entrance. Expectation rose in a flood.

“Silence absolute, living silence, not merely living but overflowing with divinity. The meditation lasted about forty-five minutes. After that one by one the disciples bowed to the Mother.

“She and Sri Aurobindo gave blessings to them. Whenever a disciple bowed to the Mother, Sri Aurobindo’s right hand came forward behind the Mother’s as if blessing him through the Mother. After the blessings in the same silence there was a short meditation.

“In the interval of silent meditation and blessings many had distinct experiences. When all was over they felt as if they had awakened from a divine dream. Then they felt the grandeur, the poetry and the absolute beauty of the occasion. It was not as if a handful of disciples were receiving blessings from their Supreme Master and the Mother in one little corner of the earth. The significance of the occasion was far greater than that. It was certain that a Higher Consciousness had descended on earth. In that deep silence had burgeoned forth, like the sprout of a banyan tree, the beginning of a mighty spiritual work. This momentous occasion carried its significance to all in the divine dynamism of the silence, in its unearthly dignity and grandeur and in the utter beauty of its every little act. The deep impress of divinity which everyone got was for him a priceless treasure.

“Sri Aurobindo and the Mother went inside. Immediately Datta was inspired. In that silence she spoke: ‘The Lord has descended into the physical today.’”

The Realisation on the Day of Victory

What, you may ask, is the significance of the Siddhi Day, the Day of Victory as the Mother called it? Well, mental explanations of a spiritual event, specially one of such magnitude, can never be really adequate, and it is best to listen to Sri Aurobindo’s own words. In a letter to me he wrote:

To another disciple he wrote:

Sri Aurobindo tells us that between Mind and Supermind there are various intermediate planes or ranges of consciousness, each with its characteristic Light, Power and Knowledge, and the Overmind is the highest of these ranges. He said that the Overmind has to be reached and brought down before the Supramental Descent is at all possible.

The ‘Descent of Krishna’ signified the fullness of the Overmental realisation, the Descent of the Divine into the very physical consciousness of Sri Aurobindo, and it was the culmination of all his previous realisations. It marked a decisive stage in his sadhana and paved the way for the Supramental Descent — the goal of Sri Aurobindo’s Yoga.

Outwardly, too, there was a great change. Sri Aurobindo announced that he would go into complete seclusion to concentrate on his Yoga. Henceforward the Mother would take up the direct charge of the community of sadhaks — their inner sadhana as well as the outer organisation. It is so that November 24, 1926 is regarded as the day when the Sri Aurobindo Ashram was founded.

The Mother’s Explanation of the True Significance of the Realisation

It was this: Krishna consented to descend into Sri Aurobindo’s body—to be FIXED there; there is a great difference, you understand, between incarnating, being fixed in a body, and simply acting as an influence that comes and goes and moves about. The gods are always moving about, and it’s plain that we ourselves, in our inner beings, come and go and act in a hundred or a thousand places at once. There is a difference between just coming occasionally and accepting to be permanently tied to a body—between a permanent influence and a permanent presence.

These things have to be experienced.

Q: But in what sense did this realization mark a turning point in Sri Aurobindo’s sadhana?

No, the phenomenon was important FOR THE CREATION; he himself was rather indifferent to it. But I did tell him about it.

It was at that time that he decided to stop dealing with people and retire to his room. So he called everyone together for one last meeting. Before then, he used to go out on the verandah every day to meet and talk with all who came to see him. . .

After a while, I too began having meditations with people. I had begun a sort of ‘overmental creation,’ to make each god descend into a being—there was an extraordinary upward curve! Well, I was in contact with these beings and I told Krishna (because I was always seeing him around Sri Aurobindo), ‘This is all very fine, but what I want now is a creation on earth—you must incarnate.’ He said ‘Yes.’ Then I saw him—I saw him with my own eyes (inner eyes, of course), join himself to Sri Aurobindo.

Then I went into Sri Aurobindo’s room and told him, ‘Here’s what I have seen.’ ‘Yes, I know!’ he replied (Mother laughs) ‘That’s fine; I have decided to retire to my room, and you will take charge of the people. You take charge.’ (There were about thirty people at the time.) Then he called everyone together for one last meeting. He sat down, had me sit next to him, and said, ‘I called you here to tell you that, as of today, I am withdrawing for purposes of sadhana, and Mother will now take charge of everyone; you should address yourselves to her; she will represent me and she will do all the work.’ (He hadn’t mentioned this to me! — Mother bursts into laughter) . . .

Shiva, on the other hand, refused. ‘No,’ he said, ‘I will come only when you have finished your work. I will not come into the world as it is now, but I am ready to help.’ He was standing in my room that day, so tall (laughing) that his head touched the ceiling! He was bathed in his own special light, a play of red and gold… magnificent! Just as he is when he manifests his supreme consciousness—a formidable being! So I stood up and… (I too must have become quite tall, because my head was resting on his shoulder, just slightly below his head) then he told me, ‘No, I’m not tying myself to a body, but I will give you ANYTHING you want.’ The only thing I said (it was all done wordlessly, of course) was: ‘I want to be rid of the physical ego.’

Well, mon petit (laughing), it happened! It was extraordinary!… After a while, I went to find Sri Aurobindo and said, ‘See what has happened! I have a funny sensation (Mother laughs) of the cells no longer being clustered together! They’re going to scatter!’ He looked at me, smiled and said, Not yet. And the effect vanished.

But Shiva had indeed given me what I wanted!

Not yet, Sri Aurobindo said.

No, the time wasn’t ripe. It was too early, much too early. 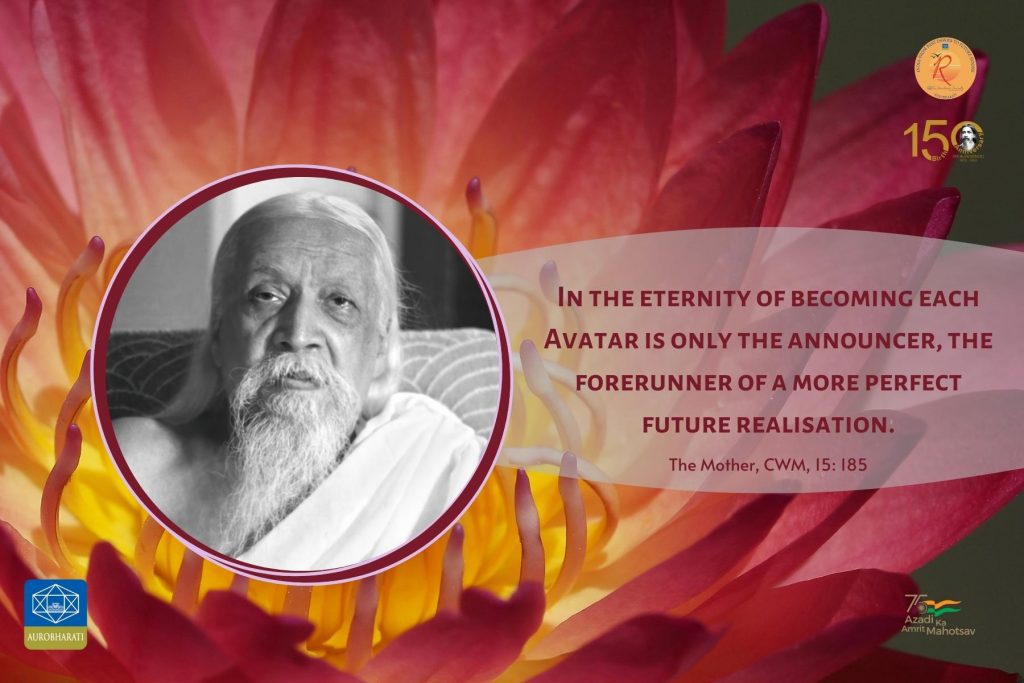 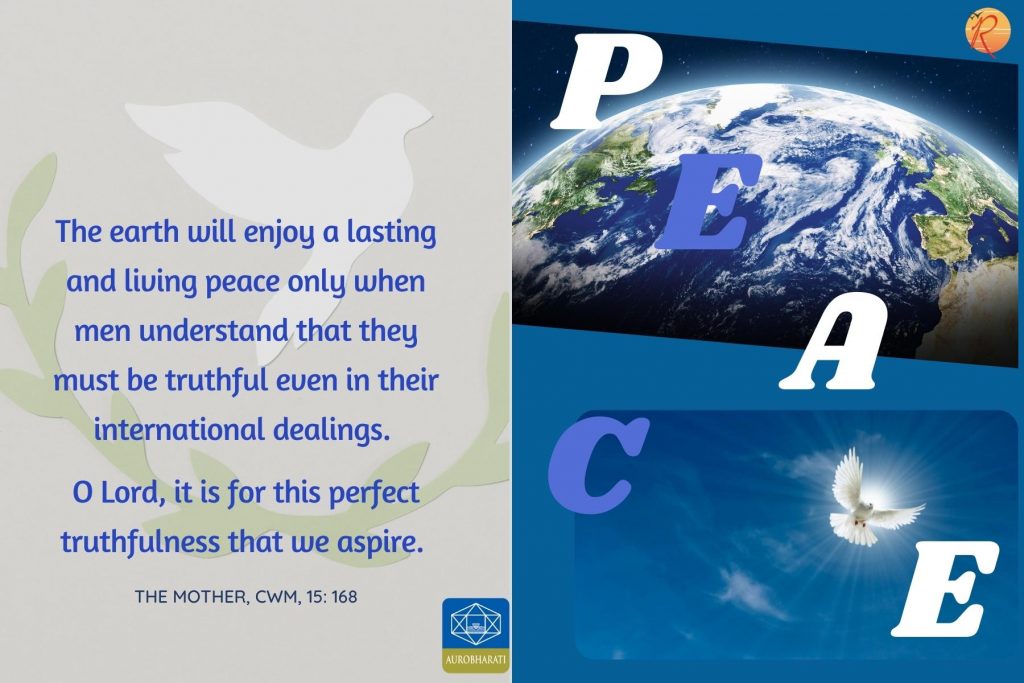 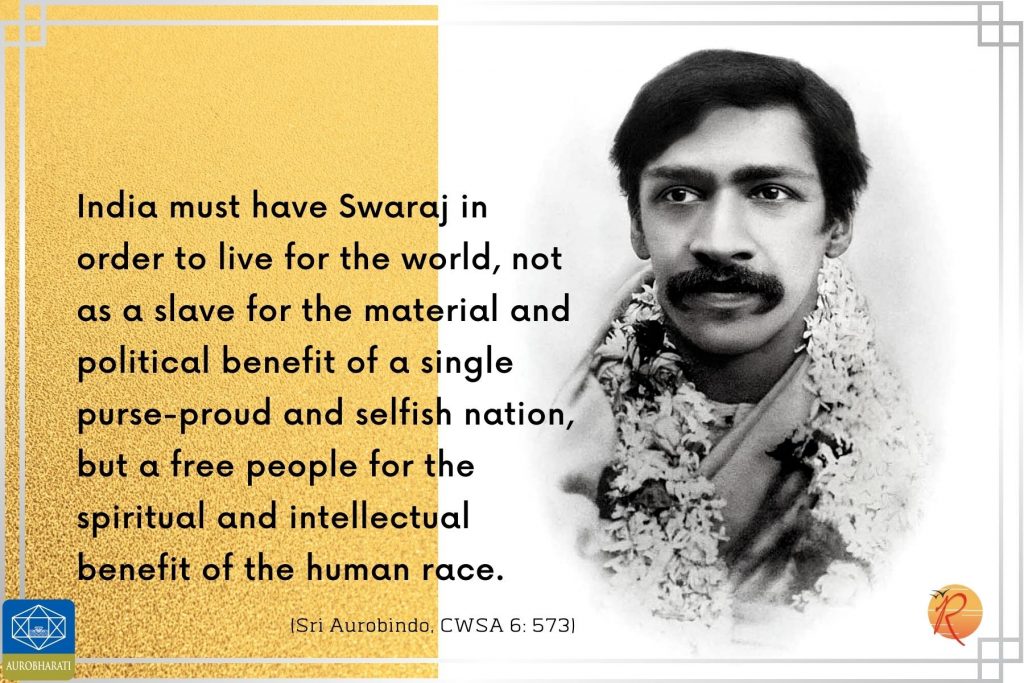