Editor’s note: Sisir Kumar Ghose presents a broad but profound overview of the new dimensions and dynamism that Sri Aurobindo brought in the timeless spiritual vision and thought given to us by our ancient sages and seers. It was published in the 1986 issue of Sri Aurobindo Circle. We present it here in two parts.

Spirituality has  been an abiding theme of Indian culture, “the master-key of the Indian mind” (CWSA, Vol. 20, p. 6).

A discovery of seers and sages, the idea still survives, survives misunderstanding as well as refusal to understand. The decline of the idea has turned post-1947 India into a nightmare.

Looking back, one can see what is missing: national idealism, a lost dimen­sion. During the Indian Renaissance we come across several thinkers who pro­vide profound readings in the mysteries of the Self and the human potential.

One of the ablest voices of a resurrected and renewed spirituality, subjectivity or yoga — for our purpose the three may be taken as one — was Sri Aurobindo, who gave it perhaps the widest wingspread.

Unless we choose to be blind his relevance is as clear as daylight. The timeless is also the most timely.

As the Veda has it: “What is her scope when she harmonises with the dawns that shone out before and those that now must shine?” (RigVeda, 1.113.10) “We do not belong to the past dawns, but to the noons of the future” (CWSA, Vol. 19, p. 10) — such is his ontological optimism, rooted in Reality.

The dynamics of spirituality is a singularly Aurobindonian concept or cate­gory. Of course, it is more than that. A nobler and deeply felt hypothesis, it is not only a mode of thought but also a mode of action. Essence of the becoming of Being, self-determination is the secret of true living: as within, so without. All is in that.

A complex phenomenon, inclusive rather than exclusive, spirituality is not bound to be remote or other-worldly.

As Sri Aurobindo put it:

“Spirituality is much wider than any particular religion, and in the larger ideas of it that are now coming on us even the greatest religion becomes no more than a broad sector branch of the one universal religion; by which we shall understand in the future man’s seeking for the eternal, the divine, the greater self, the source of unity and his attempt to arrive at some equation, some increasing approximation of the values of human life with the eternal and the divine values.”

Wave of the future, spirituality is capable of taking new forms. As Sri Aurobindo has told us, India will certainly keep her essential spirit, but there is likely to be a great change in the body. It will reject no part of life since in the new dispensation “All Life is Yoga.” As he says:

“Spirit without mind, spirit without body is not the type of man, therefore a human spirituality must not belittle the mind, life or body or hold them of small account: it will rather hold them of high account, of immense importance, precisely because they are the conditions and instruments of the life of the spirit in man.”

A thinker’s thinker but also more than a thinker, in The Human Cycle Sri Aurobindo gives spirituality a psycho-sociological focus. Not a flight of the alone to the Alone, spirituality’s role in the reshaping of the group-life is never for­gotten. The critique of Reason ties up with the prospect of a superior, gnostic society based on “another knowledge”.

Moving rapidly through the symbolic, conventional and individualistic ages, the view or in-view relates the infra- and supra-rational through the age of Reason, its functions, limitations and transcendence. A link rather than a terminus, the Aurobindonian image of man is more, not less, than rational.

Of course, the Self of man is neither the body nor the ego; the Nordic enormity may not be repeated. His use of the hidden self as the goal and driving force of social development is typical of Sri Aurobindo, at once a critique of Reason and a magnificent ontological display. Nobody has given subjectivity so many new bearings, such an encompassing. The turning of the mind upon itself and things has been, he tells us, man’s continuing crisis.

But the solution is in the problem. Crisis can be a breakthrough.

Here Sri Aurobindo brings in three supporting ideas — of evolution, integration and self-exceeding. Only when we have gone beyond humanity shall we be Man. Spiritual humanism is trans-humanism.

Empiric, it cannot lay its hand on the heart of things, of anything. Problems remain or multiply. Also, it can justify any idea, passion or position. Unwilling to admit any value beyond itself, its normal way is to stereotype, to produce faceless non-persons, an anonymous society.

With regard to man’s next higher development, reason can be a force for reac­tion. In brief, the purely rational man is not the whole or an ideal person. The same is true of a purely rational-scientific society. An Animal Farm, a not so Brave New World, is not a model. In a one-dimensional society, there will always be a sense of something wanting: the soul or self of man.

In brief, science and spirituality must work together. The science of man must be different from the other sciences. Or, as Sri Aurobindo tells us plainly: “In all the higher powers of his life man may be said to be seeking, blindly enough, for God” (CWSA, Vol. 25, p. 155). He explains:

“Since the infinite, the absolute and transcendent, the universal, the One is the secret summit of existence and to reach the spiritual consciousness and the Divine the ultimate goal and aim of our being and therefore of the whole development of the individual and the collectivity in all its parts and all its activities, reason cannot be the last and highest guide; culture, as it is understood ordinarily, cannot be the directing light or find out the regulating and harmonising principle of all our life and action.

To surpass the rational — and the religious — may not be irrational. Reason itself could prompt one to go beyond reason.

Here, once more, he takes a quick look at religion: true and false. True religion is closer and open to spirituality, the common variety is bound by dogma and creed and cannot take the larger view. Not the Sannyasi but the Rishi is the true guide. In Sri Aurobindo’s words:

The spiritual man who can guide human life towards its perfection is typified in the ancient Indian idea of the Rishi, one who has lived fully the life of man and found the word of the supra-intellectual, supramental, spiritual truth.

Such wise men will be averse to impose ideology, pet ideas or to rush through toy revolutions sure to fail. Alive to the problem of ends and means, the perfection of the instruments, in time they pre­pare for the Eternal’s hour. Such men cannot be tempted by the model of what Sri Aurobindo calls “false socialisation”.

Maybe it is an elite stance, for himself he has no doubt that “the individuals who will most help the future of humanity in the new age will be those who will recognise a spiritual evolution as the destiny and therefore the great need of the human being” (CWSA, Vol. 25, p. 265).

Spirituality is man’s inescapable, ultimate concern, its social corelate, the apex of utopian thinking. Only by fulfilling the conditions can the earthly evolution fulfill itself. The kingdom of Heaven cannot be taken by storm. 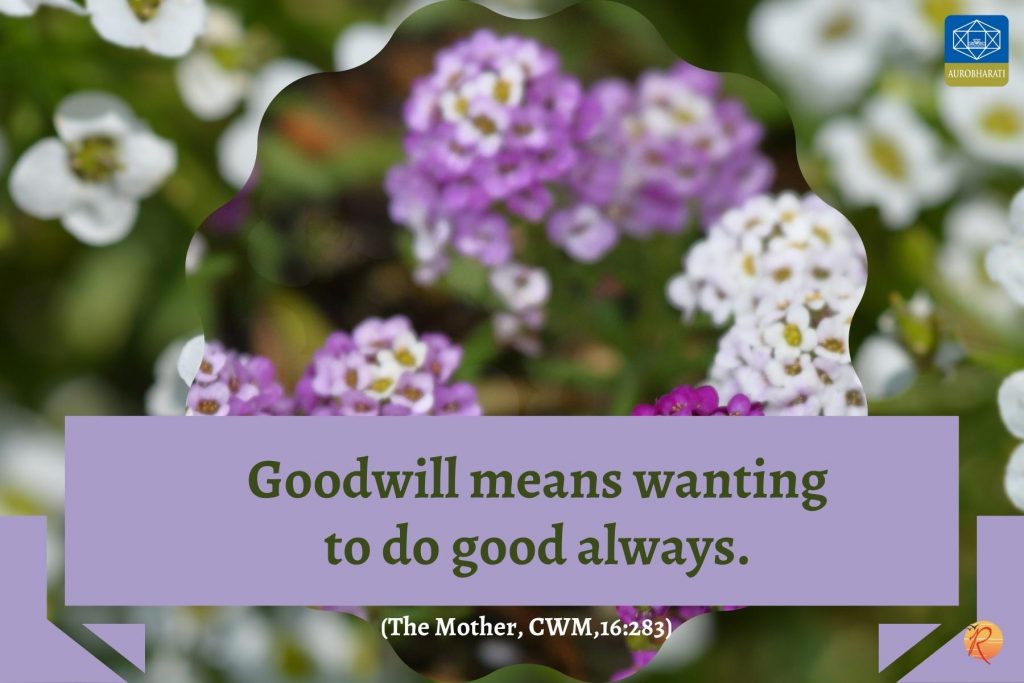 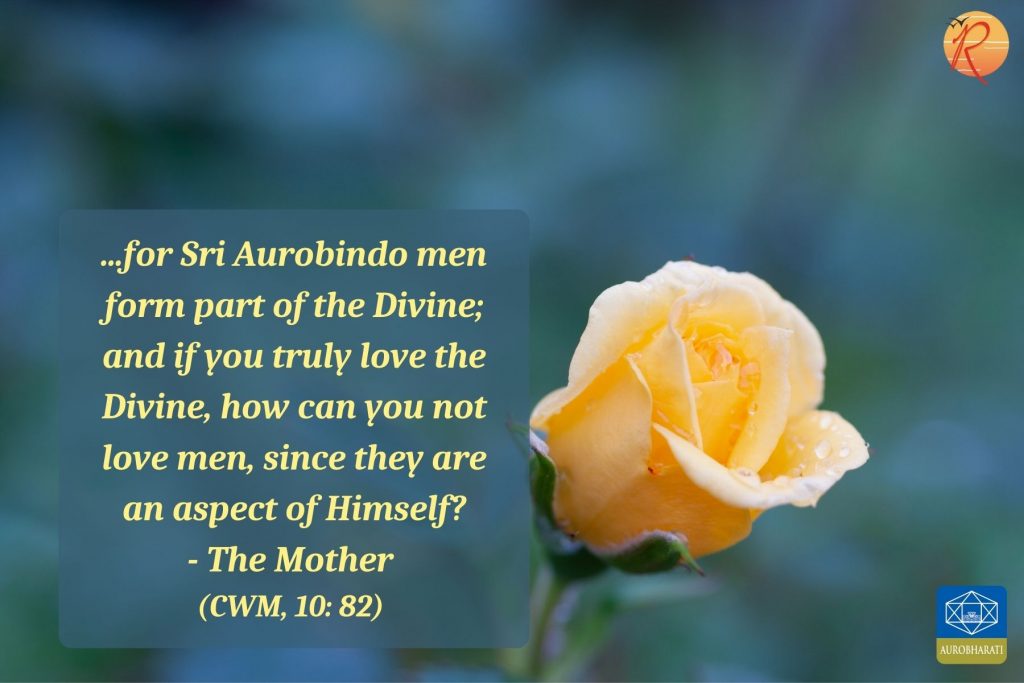