Excerpts from the Book – “Īśopaniṣad: An English Commentary”

Home » Excerpts from the Book – “Īśopaniṣad: An English Commentary”

Editor’s note: For our Book of the Month, we bring for our readers a few excerpts from Nithin Sridhar’s latest book ‘Īśopaniṣad: An English Commentary’ published by Subbu Publications (2021).

Don’t miss Nithin Sridhar in a conversation with Renaissance team on the topic – Dharma, Shastra and Future Society, included in this issue.

Foreword to the Book

The Īśopaniṣad is one of the shortest upaniṣads, yet it is one of the most important inasmuch as it encapsulates within it the entire schema of the pursuit of para-vidyā, the Supreme Knowledge. Today, teaching about Hinduism has become almost synonymous with teaching vedānta with the result that Hinduism is being taught in a highly skewed manner with an overriding emphasis on vedānta to the exclusion of the dharma–kṣetra, consisting of both pravṛtti-dharma and nivṛtti-dharma, within which vedānta appears as its supreme revelation. But as Śrī Kṛṣṇa says in the Bhagavad Gītā, the attainment of Supreme Knowledge is possible for only a select few.

Out of many thousands among men, one may endeavor for perfection,
and of those who have achieved perfection, hardly one knows Me in truth.
(Bhagavad Gītā 7.3)

The pursuit of nivṛtti-dharma is meant for only those few people in whom the desire for worldly objects has been extinguished. For others, the chain that binds them to the world has to be gradually disentangled by the pursuit of pravṛtti-dharma, the dharma of action, before they can acquire the degree of mental purity required for treading the path to mukti. This aspect of Sanātana Dharma has been largely ignored today.

There is thus an acute need to bring about a correction in perspective among the people so that all and sundry do not neglect pravṛtti dharma in favour of pursuing the highest goal of jīvanmukti even when they would be lacking in the necessary qualification for pursuing the path of nivṛtti-dharma. Nithin Sridhar’s commentary on the Īśopaniṣad fulfils this need in an admirable way. Taking the inner kernel of the meanings of the first three verses of the Īśopaniṣad, Nithin Sridhar fleshes out their meanings to give us a panoramic view of the paths to liberation as laid out in Sanātana Dharma. The author does this in two ways: first by expounding the meanings of the individual verses of the upaniṣad and second by presenting, in the second half of the book, the philosophy of the text of the Īśopaniṣad in a comprehensive manner.

The second part of the book explains in a succinct and concise way the entire terrain of Sanātana Dharma. Beginning with the theme of the upaniṣad and the puruṣārtha-s- the four goals of human existence – it moves on to an exposition of nivṛtti-dharma, the path to jīvanmukti or immediate liberation (sadyomukti). It explains the nature of Brahman and the four qualifications – known as sādhanā catuṣṭaya –required for pursuing the path of nivṛtti-dharma as well as the method of śravaṇa, manana, and nididhyāsana leading to ātma-jñāna / aparokṣa–jñāna. The state of a jīvanmukta, when the residual prārabdha continues to hold sway until the final fall of the body, and the consequent attainment of videhamukti is also explained.

In the next section, the author takes up pravṛtti dharma in all its varied aspects. This section is indeed the high point of the book. While the path of nivṛtti-dharma has been explained by most modern commentators of the upaniṣads, the path of pravṛtti-dharma / kramamukti is an area that has been sadly neglected by most modern scholars as well as commentators. Nithin Sridhar fills this vacuum with a comprehensive coverage of the path. The author builds up the background for the path of kramamukti by an exposition of Brahman as the creator and as both the material and the efficient cause of the universe, creating, sustaining and dissolving the universe by His inscrutable māyā–śakti. The sheer scope and vastness of the conception of creation is brought out by a description of the various lokas, or spheres of creation.

The author then moves on to a full-fledged exposition of the path of pravṛtti-dharma / kramamukti starting from the relation between karma and dharma, the explanations of sāmānya and viśeṣa dharma, the classification of varṇa and āśrama as the pivots around which karma revolves, the distinction between various types of karma such as vihita karma, kāmya karma, niṣiddha karma, etc. and the importance of vihita karma for obtaining the required mental purity for transitioning to the paths of nivṛtti. This section serves as a very useful compendium on karma with explanations of the fourteen saṁskāras from conception to marriage, the five mahāyajñas or great sacrifices to be performed on a daily basis, the twenty one yajñas that a householder is expected to perform at various times, and the antyeṣṭi saṁskāra or the last rite to be performed upon death.

In the case of a few persons, due to the most assiduous performance of vihita karmas and the avoidance of niṣiddha karmas, it results in the rise of supreme viveka along with all the four qualifications and makes the person fit to tread the path of nivṛtti or saṃnyāsa. In most people however, the performance of karma will lead to the path of kramamukti. This is the path in which upāsanā forms the central motif. The author has explained how upāsanā may take the forms of dhyāna, pūjā or bhakti–yoga and ultimately to the stage of leaving the body by the ‘northern path’ upon death to travel to Brahmaloka and reside therein in bliss until the end of the kalpa and then to be absorbed totally in Brahman. The last section of the book deals with the third path – the path to suffering – in which the jīva by neglecting the path of virtuous action is hurled again and again into the cycle of births and deaths.

Nithin Sridhar’s commentary on the Īśopaniṣad, as well as the exposition of the Upaniṣad’s philosophy, is written from the perspective of Advaita Vedānta. But there is no polemics in the work; it focuses entirely on shedding light upon some of the most important and often neglected aspects of Hinduism. This book is yet another great addition to the five books authored by Nithin Sridhar and it cannot but be highly recommended. (pp. x-xiii)

My enquiry into this wonderful text began in 2012 when I had come across some arguments on the internet regarding how different commentators have interpreted some of the mantras of this Upaniṣad in a vastly divergent manner. In particular, a long discussion on the topic with my friend Rajarshi Nandy, who is a scholar and a Tantra practitioner, led me to embark upon an in-depth study and reflection of this Upaniṣad along with its commentaries. In particular, I focused my attention towards the Sanskrit commentary of Śrī Shankaracharya’s Bhagavadpada and the English commentary of Śrī Aurobindo, as well as many recent translations of the text.

2012-13 were also the years when I became a recipient of the immense anugraha of my Guru, Jagadguru Śrī Bharati Tirtha Mahaswamiji –the Śaṅkarācārya of Sringeri pīṭha and became properly introduced to Advaita Siddhānta through a series of lectures delivered by him during his Vijayayātrā. Then, in February 2013, I received an ādeśa from my divine mother and iṣṭa, Mahākālī directing me to write a commentary in English for Īśopaniṣad. Significant sections of Part I of the book were written during 2013-14 and Part II during 2016-17. They were further revised and polished during 2018-19. This commentary could not have been completed without the anugraha of my mother Mahākālī and my Guru. My sāṣṭāṅga-namaskāra to both of them. (p. xiv)

The śāstra-s speak about various necessary qualities and attitudes that must be imbibed in an individual in order to become eligible for jñāna sādhanā. A person of impure mind, who is bound by impurities like anger, lust, etc. cannot grasp the true nature of Brahman. Hence, before practicing jñāna sādhanā/mokṣa sādhanā, one must achieve ‘citta śuddhi’ or purification of the mind and attain certain qualities collectively called ‘sādhanā catuṣṭaya’ or four-fold qualifications required for (jñāna) sādhanā.

The present Upaniṣad opens with the statement that only those who have understood that the sensory objects are temporary and mere products of avidyā and that Brahman alone inhabits all the objects as their Ātma, will renounce all their desires and travel on nivṛttimārga. Hence, without the development of discrimination (viveka) between what is nitya/permanent i.e. Brahman and what is anitya /temporary i.e. the world, one cannot practice jñāna sādhanā. Kaṭhopaniṣad (2) says:

“One who has not desisted from bad conduct, whose senses are not under control,
who has not achieved one pointed concentration, whose mind is not restrained, cannot attain Self through Knowledge.”

The term ‘duścaritaṁ /bad conduct’ here refers to a person who lives his life without a care or concern for dharma. He is completely under the influence of impurities of mind like anger, hate, delusion, desire, etc. and acts in a selfish and adharmic manner. Hence, a person who cannot live his life by the tenets of dharma like truth, non-violence, non-stealing, etc. is not qualified for nivṛttimārga.

Similarly, a person whose mind and the senses are ever indulged in sensory pleasures and temptations and without restraint (śāntaḥ) and hence devoid of one pointed concentration (samāhitaḥ) are also not qualified for the path.

In another verse, the same Upaniṣad says that only those people who are associated with ‘discriminating intellect/vijñāna’, ‘controlled mind (samanaḥ)’ and are ‘purity (śuciḥ)’ can attain mokṣa. The same has been repeated in Muṇḍakopaniṣad that the knowledge of Brahman must be taught by a teacher to only those whose mind is pure (praśānta citta) and their senses are under control (śama). Similarly, the Taittirīyopaniṣad also speaks about control of mind (śama) and control of senses (dama) and to that it adds righetousness (ṛtaṁ), truth (satya), austerity (tapas), practice of rites and rituals (Agnihotra), learning and teaching (svādhyāya-pravacanaṁ) and performance of other duties.

Thus, the Upaniṣads at various places have listed many qualities like truth, austerity, righteousness, control of mind and senses, discriminating intellect, purity, one pointed concentration etc. as the necessary eligibility criteria for practicing the path of renunciation. Ādi Śaṅkarācārya has systematically arranged these qualities into four categories and has termed it as ‘sādhanā catuṣṭaya’- the four-fold qualifications/competencies required to make one eligible for jñāna sādhanā. In his Vivekacūḍāmaṇi, Śaṅkarācārya explains these competencies thus:

“First, the discrimination between real and unreal is counted.
(Next comes) dispassion towards enjoyment of fruits of action here and the next world. After this comes, the six qualities like “śama /control of mind”.
(And finally) a burning desire for liberation.”

Hence, the four-fold competencies are – viveka, vairāgya, ṣaṭka sampatti and mumukṣutva. ‘Viveka’ or “discrimination” is described as the quality of the intellect to differentiate between what is real and permanent i.e. Brahman and what is unreal and temporary i.e. sensory world. This is the most important of the qualities because every other competency follows from this. It is for this reason alone, the Īśopaniṣad begins by enumerating about it.

Once a person has developed viveka and understood that the Brahman alone is real, he would develop dispassion towards the pleasures and temptations offered by the sensory world. This ‘dispassion’ towards enjoyment of pleasures like offspring, wealth etc. in this world and enjoyment of heaven, etc. in the next world is termed as “vairāgya”. (pp. 115-116)

Click HERE for an insightful conversation with author Nithin Sridhar. 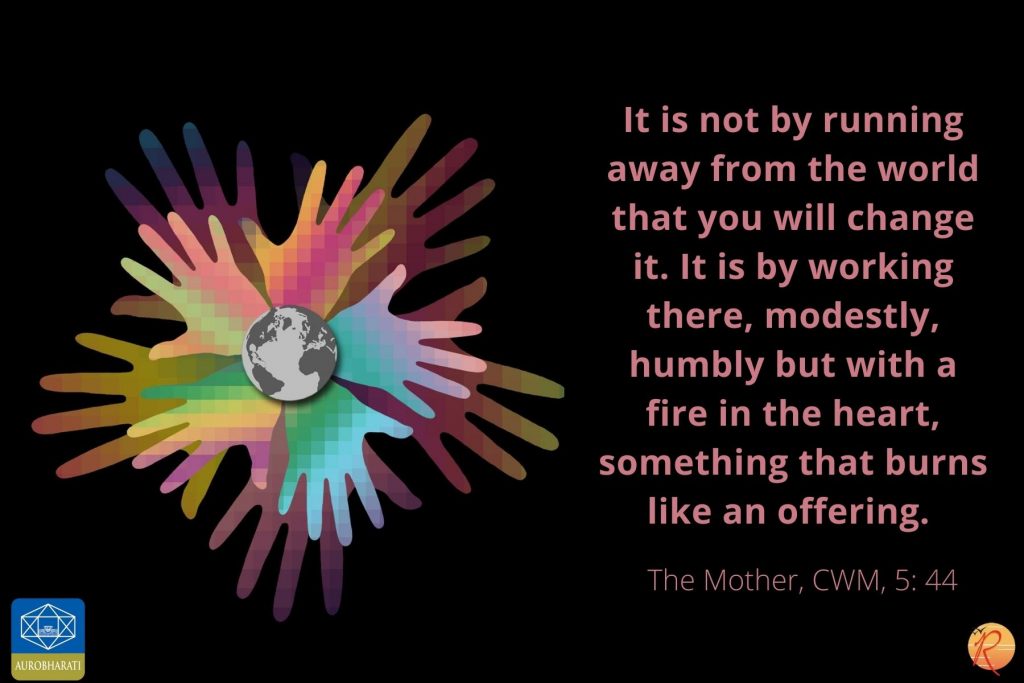 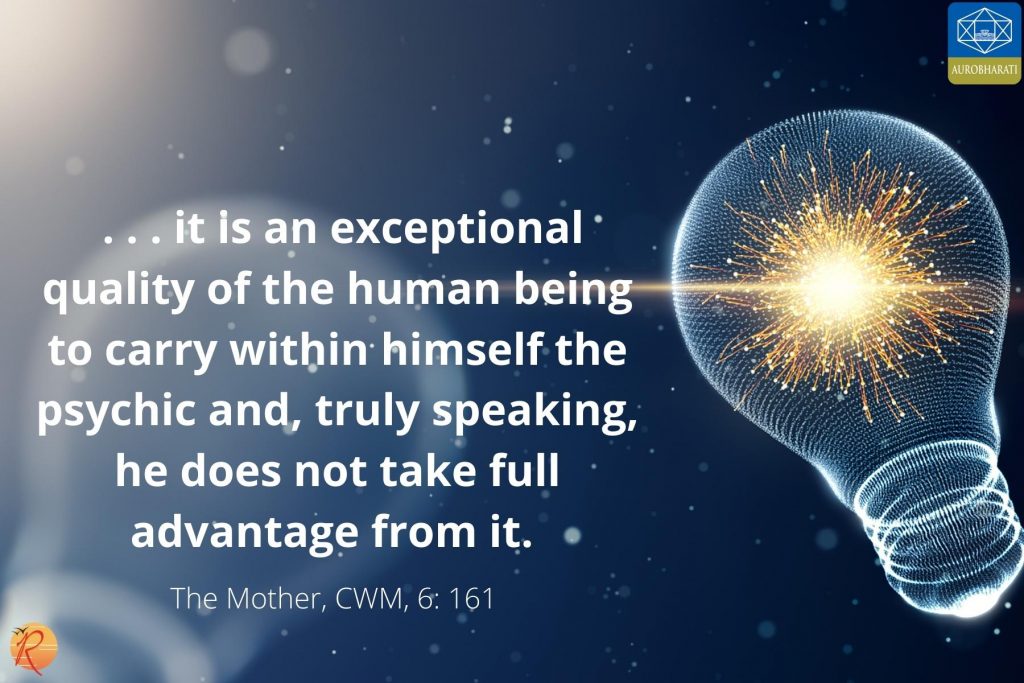