Editor’s note: This is a slightly reformatted version of a TedX talk given by the author. A reader-friendly voice is still maintained.

One finds many vague ideas floating around with regard to the history, practicality and use of Sanskrit. Let us first clarify some of them.

Sanskrit has some remarkable features that are important to the way we learn. This is true not just for the present, but for the future as well.

The systematic nature of Sanskrit is exceptional. Its grammatical structure was well-defined and precisely laid out by sage Panini in the 5th century BCE, and little has changed in over two millennia. Sanskrit is also almost entirely self-contained, and any new vocabulary or structure can be generated within the language itself.

One usually thinks of Sanskrit as only the language of religion, scripture and prayer. But in truth, Sanskrit is the language in which almost every subject was written. There is in fact, more non-religious, scientific literature in Sanskrit than texts on religious subjects.

India, the land of the origin of Sanskrit, was once the leader in the field of scientific discoveries, and almost all of those were written in Sanskrit.

Four Reasons Why Sanskrit is Relevant – Today and Tomorrow

Sanskrit remains relevant not only for today but also for the progressive evolution of humanity. Here are some of the reasons for such an assertion:

Sanskrit is a language that explains things with much clarity. One of the most important features with regard to this is that Sanskrit is not an object-specific language.

Let us understand this with an example.

It is well-known that Sanskrit uses many words for a single object. Most people think that this creates difficulty in learning Sanskrit, as there is seemingly no unanimity in the various words that might refer to a particular object. But in fact, it makes the meaning clearer and more specific.

For example, to refer to water, some use the word jalam, others use neeram, yet others use paaneeyam, still others would prefer to use vaari. In fact, there are more than two hundred words used for water alone.

The reason for so many words for a single object is that Sanskrit users never use words specific to the object, but use words describing the various properties of the object. So each of the many words used for water here describes a particular property of the water.

In this manner, every word in Sanskrit describes a property of the object, and presents its users with a holistic understanding of the objective word.

Another important feature of Sanskrit is that because words are formed from root-sounds, it has the potential to create as many words as needed. And the words formed are simple and self-explanatory.

Based on this transparent system, one can create any amount of words needed for day-to-day use. For example, by combining the one monosyllabic root-sound kri, which has the root-experience ‘to do’ or ‘to make’ or ‘to put into action’, one can derive thousands of words with different meanings. Yet, all these meanings will be clearly defined by the root-experience.

What does it mean to say that the Sanskrit language is a living, breathing entity? This quality comes from the way the Sanskrit alphabet is arranged.

In the Sanskrit alphabet, vowels and consonants are arranged in two separate groups, each in an extremely logical fashion.

Consonants are arranged in vertical and horizontal groups according to the voicing state, manner of articulation, place of articulation and the intra-oral pressure required to produce them. The logic in this arrangement is based on human vocal anatomy, which makes it easier for us to memorise the sound of each consonant.

In Sanskrit, all sounds are articulated from five distinct places, all located in the mouth: the throat, the palate, the cerebrum, the roots of the upper teeth, and the lips. On the basis of this, the sounds are either guttural, palatal, cerebral, dental or labial.

Though the letters of a horizontal group of consonants are pronounced from a single position, each sound in that group differs from the others because of its internal efforts.

When we pronounce the first line of consonants: ka, kha, ga, gha, nga, we feel the rhythmic breath of this alphabet. The letters, like us, breathe.

Now that we know that the Sanskrit alphabet is a living, breathing thing, we go an incredible step further.

This unique alphabet, by its very arrangement, can also teach us the practice of pranayama.

Each group ends with an oronasal sound, which requires the breath to be released through both the mouth and the nose.

But here’s the amazing thing.

So if we consciously recite the Sanskrit alphabet, we can actually experience the play of minimal and maximal breath, contraction and expansion, concentration and meditation, and feel the alphabet breathing. In effect, one experiences the benefit of pranayama.

Each sound impacts our vocal cords and nervous system. Each sound strikes a different chord within us. Reciting the Sanskrit alphabet, therefore, is not just an exercise in phonetics, but an important method of balancing and calming the mind.

Sanskrit letters are potent enough to stimulate all the powers of the brain and the nervous system and help to improve concentration, memory and perception.

Anusvaara is the only pure nasal sound in Sanskrit and is produced by closing the mouth completely and releasing air through the nose. The sound is drawn down into the throat, and then nasalized with a lip sound of ‘mmm’. 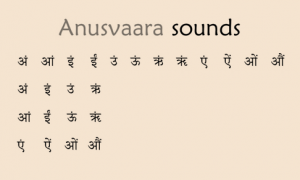 Combining it with all vowels and reciting it gives the benefits of bhramari pranayama, or the bee breathing technique.

Visarga sound: Visarga is the word for two dots often placed just after a Sanskrit character. The word visarga in Sanskrit means ‘to send forth’ or ‘to discharge’. This refers to the release of sound through exhalation, represented by the two dots. Phonetically, sound is produced following a vowel by expelling air from within. 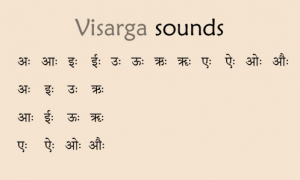 The visarga pushes energy out or opens it, and is connected to expression, expansion and realization. This is the same effect as baahyakumbhaka has in pranayama, and helps in focus and concentration.

Urasya sound: The last sound of the Sanskrit alphabet (ha) is a purely aspirate sound produced from the throat. However, when this sound is combined with the fifth letter of each of the last three groups of plosives (ëa, na, ma) and the semi-vowels (ya, ra, la, va) then it is no longer glottal; it becomes a pectoral or urasya sound, requiring exertion of the thorax.

The following seven are the urasya sounds in Sanskrit. For these sounds, we have to throw the sound ha from the thorax and then enunciate the remaining sounds in combination with it. 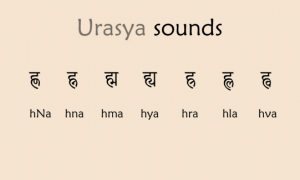 If we articulate these sounds together repeatedly, we can feel the exertion in the thoracic and abdominal region. We can also feel the rhythmic play of the air release. This is similar to practising the kapaalabhaati kriya in pranayama.

One would think that a logically arranged alphabet that also teaches us pranayama would be astonishing in itself. But in practice, it has led to an even more remarkable use.

The Sanskrit alphabet, with its orderly and scientific arrangement, provides a simple means of understanding the production of phonemes and memorizing them.

Because of this, it has now come to the attention of plastic surgeons, speech pathologists, dentists and voice culture experts, who feel that the Sanskrit alphabet can be a valuable tool in creating a simplified version of speech evaluation that can be used to evaluate and identify speech-related disorders and disabilities in patients.

Let us now briefly explore the amazing flexibility of Sanskrit.

Most of us are probably familiar with this famous sentence: ‘Able was I ere I saw Elba’.

The phrase was crafted in 1848 by a magazine writer who used Napoleon’s exile to the island of Elba as an inspiration for his wordplay.

As we read this sentence again, we see what is special about it.  Reading it once more, this time from right to left, we find that it reads the same. This is called a palindrome.

There are, in English, words like peep, noon, dad, madam etc. which, when read from either left to right or right to left, give the same sounds and often, the same meanings.

Now let us see this verse from a Sanskrit text in which we will not only see a palindrome, but will also be amazed at the genius of the poet and the extreme flexibility of the Sanskrit language.

Here, we can see that the second half of the verse is formed by reversing the first half. The entire verse, from left to right and right to left, is the same.

But there is more to this verse.

The most amazing and outsanding thing about this verse is that the first half is a description of Lord Rama, and the second half, which is the reverse of the first half, describes Lord Krishna. One wonders how the poet could have managed this!

Also, we can observe that by reversing the first line or by reading it from right to left, the arrangement of syllables by short and long remains intact, there is no loss in the rhythmic pattern. It perfectly follows the rules of metrics, rules of grammar and rules of poetry. Everything is perfectly maintained.

What can we call this? Is it Art? Science? Mathematics? Or is it poetry, a formula, a mantra?

There are endless examples which demonstrate the amazing flexibility of the Sanskrit language. These show not only its richness of vocabulary, but its amazing power of expression.

So we come back to the question – Is Sanskrit Relevant Today?

Sanskrit, as one of the oldest existing languages, has contributed immensely towards shaping the history of India’s culture and civilisation. But even today, its beauty, logic and almost flawless structure bring a universal appeal.

The proper use of Sanskrit in everyday life can endow its user with enhanced creativity and imagination, clearer thinking, deeper concentration and better memory.

Not only does Sanskrit help students to gain self-confidence and clarity in speech, language skills and logical thinking, it also enhances their skill and understanding in other, seemingly unrelated subjects like science, mathematics and computers. Moreover, Sanskrit generates a deeper awareness in students of themselves and everything around them. These are timeless qualities.

Sanskrit’s versatility of expression, its amazing power to create new words, its ability to meet the challenges and needs of the future, its incredible flexibility, and its utility in this age of science and technology…. Therein lies the relevance of Sanskrit.

Let us end with a Sanskrit verse translated by Sri Aurobindo: 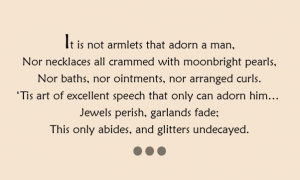 A Sahitya Akademi and President of India awardee, Dr. Sampadananda Mishra is an author, speaker and researcher on subjects related to Sanskrit, Indian Culture, Spirituality, Yoga and Education. 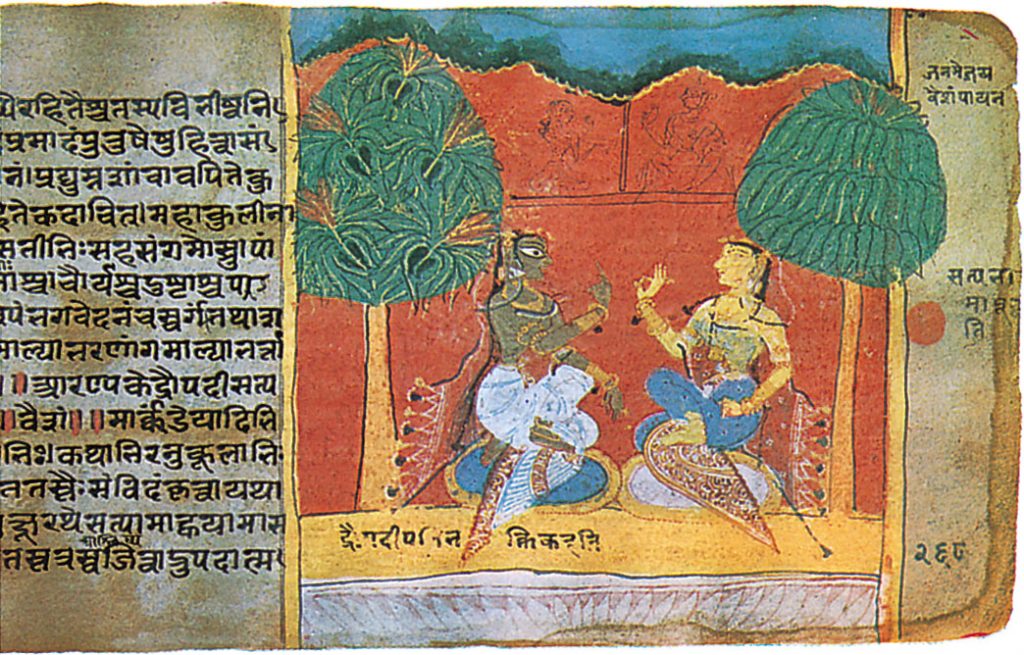 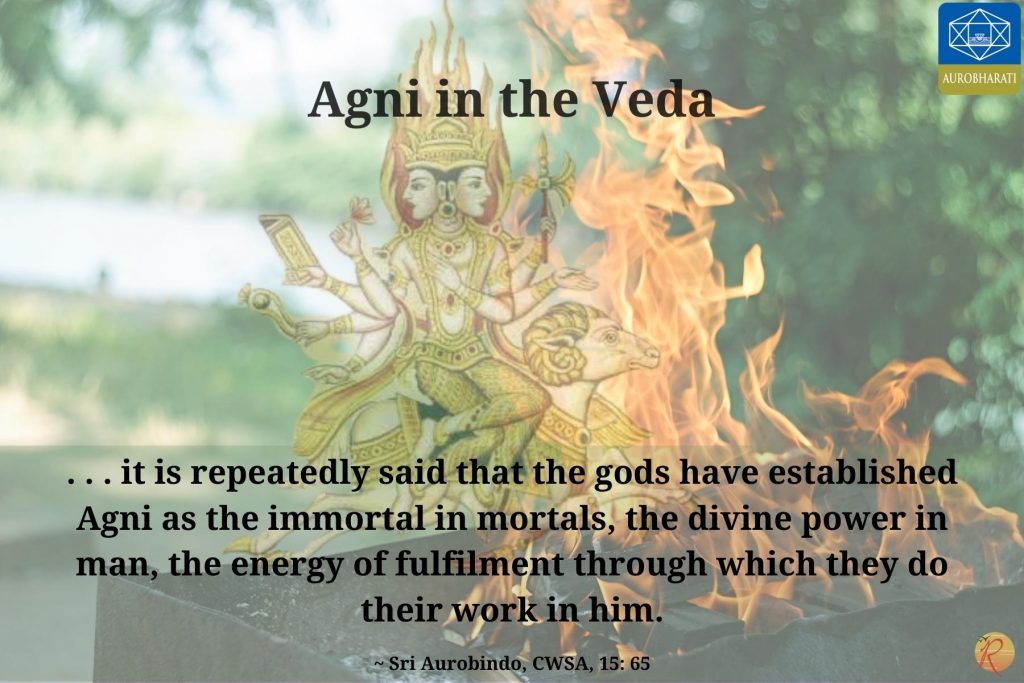