Aspiration to Create a Conscious Being

Home » Aspiration to Create a Conscious Being

“The education of a human being should begin at birth and continue throughout his life. Indeed, if we want this education to have its maximum result, it should begin even before birth; in this case it is the mother herself who proceeds with this education by means of a twofold action: first, upon herself for her own improvement, and secondly, upon the child whom she is forming physically.” (CWM, Vol. 12, p. 9)

“For it is certain that the nature of the child to be born depends very much upon the mother who forms it, upon her aspiration and will as well as upon the material surroundings in which she lives. To see that her thoughts are always beautiful and pure, her feelings always noble and fine, her material surroundings as harmonious as possible and full of a great simplicity—this is the part of education which should apply to the mother herself. And if she has in addition a conscious and definite will to form the child according to the highest ideal she can conceive, then the very best conditions will be realised so that the child can come into the world with the utmost potentialities.” (CWM, Vol. 12, p. 9)

Parents’ state of consciousness during conception

“Even as the state of consciousness of the last moments of life is of capital importance for the future of the one who is departing, so too the state of consciousness in which the parents are at the moment of conception gives a sort of stamp to the child, which it will reflect throughout its life. So, these are apparently such little things—the mood of the moment, the moment’s aspiration or degradation, anything whatsoever, everything that takes place at a particular moment—it seems to be so small a thing, and it has so great a consequence…. And people are not aware of that.

“Later, when the child behaves nastily, they scold it. But they should begin by scolding themselves, telling themselves: “In what a horrible state of consciousness I must have been when I brought that child into the world.” For it is truly that.” (CWM, Vol. 5, p. 412)

“…with most people who have children almost without wanting it, “just like that,” for them it’s a sort of… (naturally, many women desire to have children, but without even knowing what it means), for the vast majority of educated people, that is to say, whose heads have been stuffed full of ideas about the faults one mustn’t have, the qualities one must have and so on, all that they repressed in their beings, all the bad, pernicious instincts, it all comes out [in the child].

“I remembered (I observed and saw), I remembered something I read very, very long ago; I think it was by Renan, he wrote somewhere that one should beware of parents who are good and very respectable, because… (laughing) birth is a “purge”! And he also said: observe carefully the children of bad people, because those often are a reaction! So then, after that, after my experience, when I saw, I said to myself, “But that man was right!” For people, it’s a way of purging themselves. They throw out of themselves all that they don’t want. There are some children here… horrid! And that’s it, you wonder, “How come? Their parents are very good people….” It’s very interesting, because it gives the key of what should be done—by showing you what shouldn’t be done, it gives you the key of what should be done.” (Mother’s Agenda, Vol. 10,  November 22, 1969)

The Power of a Mother’s Thought and Will

“Maternity is considered as the principal role of woman. But this is true only so long as we understand what is meant by the word maternity. For to bring children into the world as rabbits do their young—instinctively, ignorantly, machine-like, that certainly cannot be called maternity! True maternity begins with the conscious creation of a being, with the willed shaping of a soul coming to develop and utilise a new body. The true domain of women is the spiritual. We forget it but too often. To bear a child and construct his body almost subconsciously is not enough. The work really commences when, by the power of thought and will, we conceive and create a character capable of manifesting an ideal.

“And do not say that we have no power for realising such a thing. Innumerable instances of this very effective power could be brought out as proofs.

“First of all, the effect of physical environment was recognised and studied long ago. It is by surrounding women with forms of art and beauty that, little by little, the ancient Greeks created the exceptionally harmonious race that they were.

“Individual instances of the same fact are numerous. It is not rare to see a woman who, while pregnant, had looked at constantly and admired a beautiful picture or statue, giving birth to a child after the perfect likeness of this picture or statue. I met several of these instances myself. Among them, I remember very clearly two little girls; they were twins and perfectly beautiful. But the most astonishing was how little like their parents they were. They reminded me of a very famous picture painted by the English artist Reynolds. One day I made this remark to the mother, who immediately exclaimed: “Indeed, is it not so? You will be interested to know that while I was expecting these children, I had, hanging above my bed, a very good reproduction of Reynolds’ picture. Before going to sleep and as soon as I woke, my last and first glance was for that picture; and in my heart I hoped: may my children be like the faces in this picture. You see that I succeeded quite well!” In truth, she could be proud of her success, and her example is of great utility for other women.

“But if we can obtain such results on the physical plane where the materials are the least plastic, how much more so on the psychological plane where the influence of thought and will is so powerful. Why accept the obscure bonds of heredity and atavism—which are nothing else than subconscious preferences for our own trend of character—when we can, by concentration and will, call into being a type constructed according to the highest ideal we are able to conceive? With this effort, maternity becomes truly precious and sacred; indeed with this, we enter the glorious work of the Spirit, and womanhood rises above animality and its ordinary instincts, towards real humanity and its powers.

“In this effort, in this attempt, then, lies our true duty. And if this duty was always of the greatest importance, it certainly has taken a capital one in the present turn of the earth’s evolution.”  (CWM, Vol. 2, pp. 157-158)

Is it possible for the mother and father to ask for the soul they want?

“To ask? For that they must have an occult knowledge which they don’t usually have. But anyway, what is possible is that instead of doing the thing like an animal driven by instinct or desire and most of the time, without even wanting it, they do it at will, with an aspiration, putting themselves in a state of aspiration and almost of prayer, so that the being they are going to form may be one fit to embody a soul which they can call down to incarnate in that form. I knew people—not many, this does not often happen, but still I knew some who chose special circumstances, prepared themselves through special concentration and meditation and aspiration and sought to bring down, into the body they were going to form, an exceptional being.

“In many countries of old—and even now in certain countries— the woman who was going to have a child was placed in special conditions of beauty, harmony, peace and well-being, in very harmonious physical conditions, so that the child could be formed in the best possible conditions. This is obviously what ought to be done, for it is within the reach of human possibilities. Human beings are developed enough for this not to be something quite exceptional. And yet it is quite exceptional, for very few people think of it, while there are innumerable people who have children without even wanting to.

“… It is possible to call a soul, but one must be at least a little conscious oneself, and must want to do what one does in the best conditions. This is very rare, but it is possible.” (CWM, Vol. 8, p. 200) 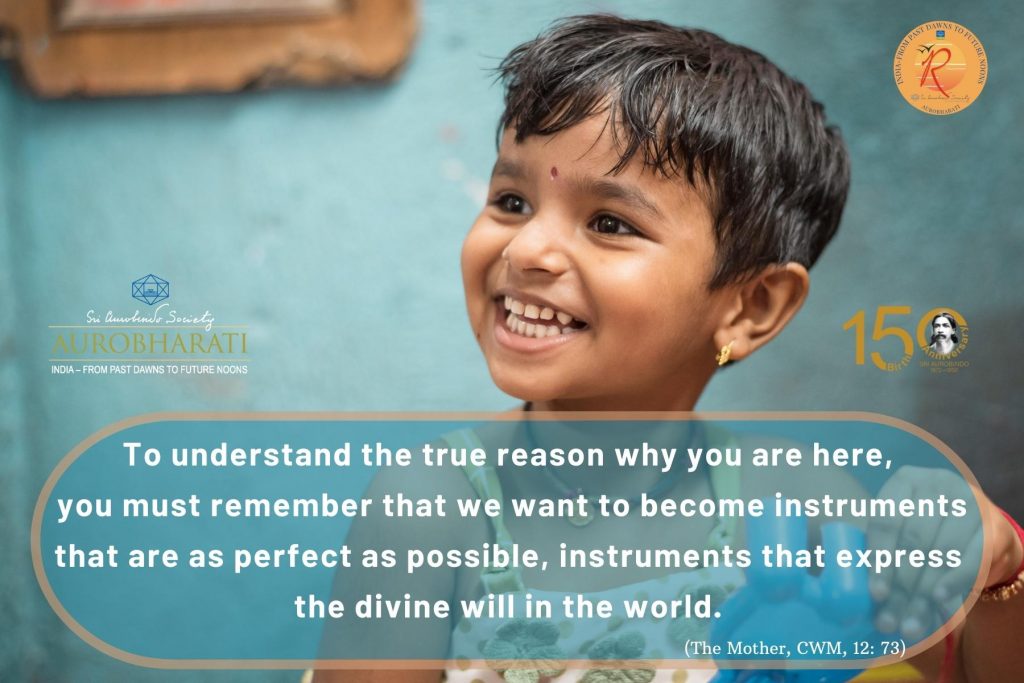 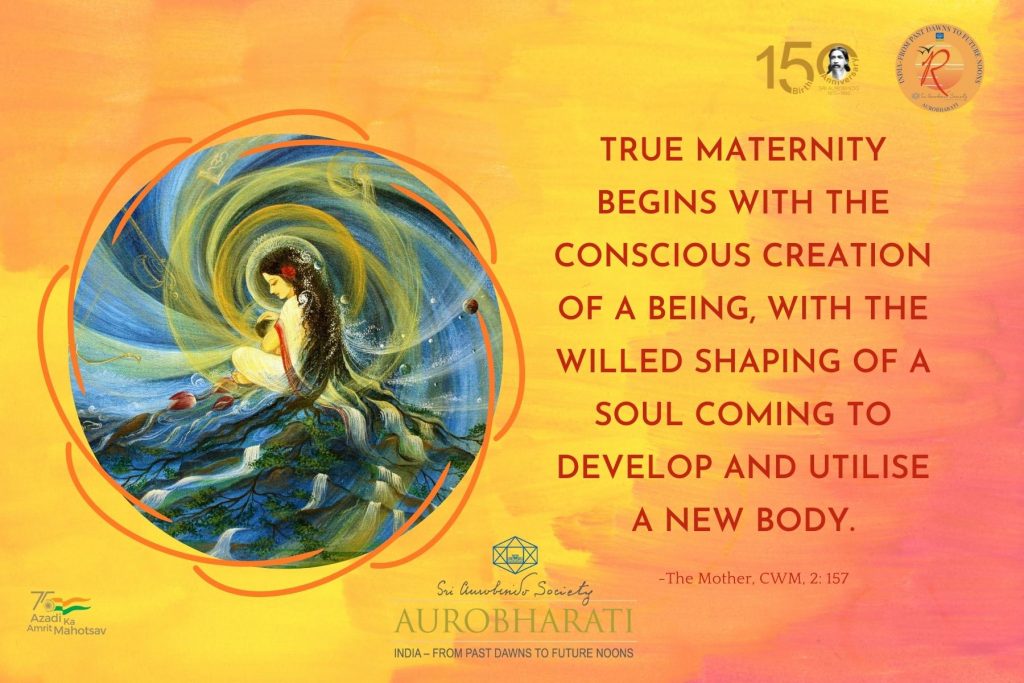 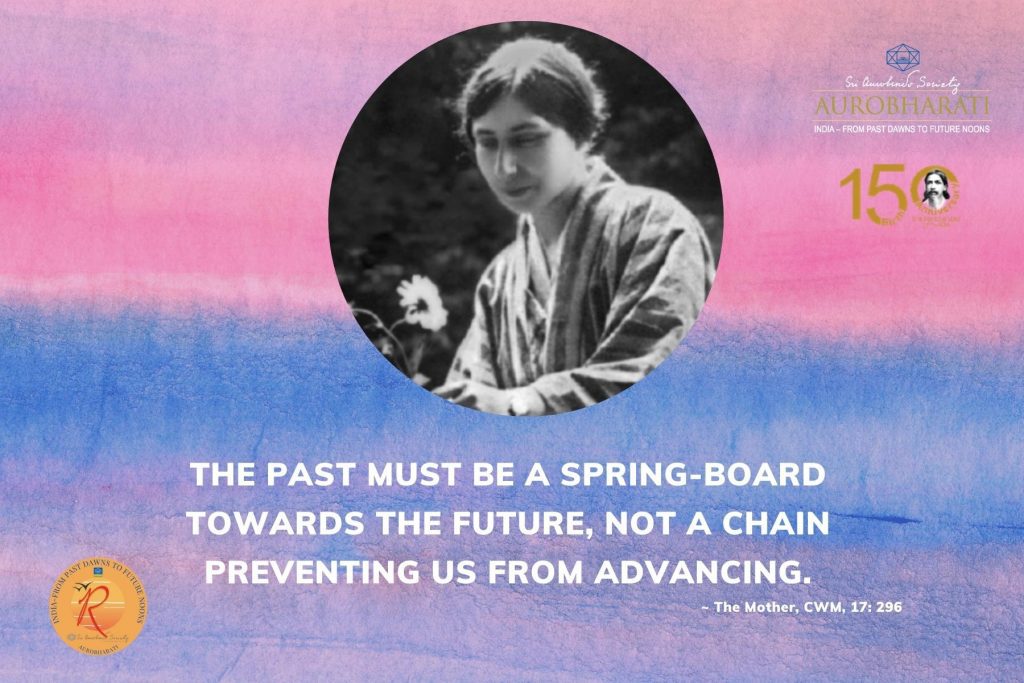